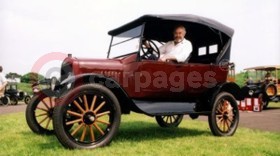 Brentwood, 2 June, 2003 - A 64 year-old classic car enthusiast and head of a family-run garage business from Hasketon, near Woodbridge in Suffolk has beaten entrants from all over the UK to win the Ford Model T Challenge.

Michael Ladd's outstanding restoration of a 1924 Model T Tourer won for him the £5,000 top prize when judging took place on Sunday at the Haynes Motor Museum near Yeovil in Somerset.

"I couldn't believe my ears when I heard my name read out as the winner," said Michael. "It took me and family friend Rod Powney over a year to restore the car. I already have a few classic cars but when I heard about the Model T Challenge it really caught my imagination so I thought I would have a go.

"The car was originally sold in Nebraska in the USA but by the time I got my hands on it in January 2002 it was in a bad way with woodworm and rust," he added.

Over 40 entries were received for the Ford Model T Challenge from as far afield as Orkney and Cornwall. Anything from a rolling chassis with tax and MoT up to a "factory gate" standard car was eligible for the prize, as long as it represented an authentic Model T at some stage of its working life.

The majority made it to Yeovil where they were viewed by a panel of three judges comprising Steve Cropley, editor-in-chief of 'Autocar' magazine, Neil Tuckett who has been collecting, restoring and selling Model T Fords since 1984 and Daniel Ward, executive director of public affairs for Ford of Britain.

"The great thing about this competition is that there will now be around 40 more working Model Ts on the roads than was the case in early 2002 when the project was first announced," he explained.

Highly-commended certificates were awarded to Ross Lilleker of Chesterfield and Rogert Midgley of Otley, Leeds, for their excellent Model T truck entries.

"The spirit of the Model T was re-ignited by the Challenge and I am sure Henry Ford would have been pleased by what these British Model T enthusiasts have achieved," commented Neil Tuckett.

The Ford Model T Challenge is just one of many activities celebrating Ford's 100th anniversary this year. By co-incidence the actual date of the Ford anniversary, June 16, is also the date of Michael Ladd's 65th birthday!