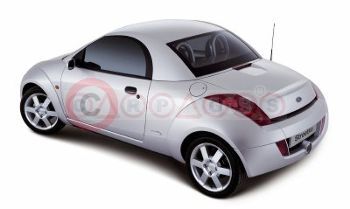 It was the concept car that everyone said Ford should build. Ford listened, and the new Ford Streetka is now in production.

The Ford Streetka Concept, a design exercise by Ghia, was the star of the Turin Motor Show in 2000. It was clever yet simple, based on one of the most innovative sub-B vehicles and inspired by traditional sports cars from a bygone era such as the “Frog-Eye” Sprite and MG Midget. The result was a modern interpretation of the simplicity and fun of the classic two-seater roadster, truly in character with the original design flair of the Ford Ka.

The Streetka philosophy truly fits with the character of the Ka, a compelling small car with the makings of a design icon. Streetka also exemplifies Ford’s plans to expand its development of derivative products as part of a product-led transformation strategy that will treble its product-launch activity across Europe over a five-year period.

It offers classic open-air fun in a desirable, stylish, contemporary and high quality yet affordable two-seater package. Its stunning looks have remained true to the original design of the Turin Show concept car and are well matched by peppy performance from its new 1.6-litre Duratec 8V 95 PS engine and sharp driving dynamics.

While clearly based on the Ka hatchback, the Streetka is effectively a unique body structure engineered especially to produce this small roadster.

The Streetka was progressed from its concept form by a team of in-house Ford designers led by Chris Bird. It has been engineered from the ground up through a new relationship between Ford of Europe and Industrie Pininfarina SpA. Pininfarina worked hand-in-hand with Ford to engineer the Streetka for volume production. This was completed in an extremely short time frame of about 24 months. Streetka features a unique interior with special touches that are appropriate to the new jewel in the Ka crown.

The Streetka is expected to attract the fashionistas to the Ka range: 20 or 30-something young singles or starting-out couples, for whom fashion and music are key interests. Streetka has already touched the popular music scene as one of the leading sponsors for Kylie Minogue’s 2002 European ‘Fever’ concert tour. ‘Teaser’ appearances of the vehicle at concert venues during Kylie’s tour brought Streetka’s attention-grabbing ‘look at me’ styling directly to these consumers.

The Streetka is notable for being a ‘first’ in various respects: