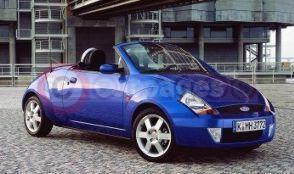 Everyone said Ford should build it and now it is ready to hit the road. Streetka, the Ghia-built star of the Turin Motor Show in 2000, has evolved from concept car to production reality. Unveiled in September at the Paris Motor Show, Streetka will go on sale in spring next year.

Designed by an in-house team lead by Ford design chief Chris Bird, Streetka has been engineered from the ground-up in a new relationship with the renowned Italian design house and coachbuilder, Industrie Pininfarina. Working closely with Ford, Pininfarina has taken Streetka from show car plinth to production reality in around 24 months.

Although clearly based on the icon Ka hatchback, Streetka effectively sits on a bespoke engineered structure, is powered by a new 95PS 1.6-litre Duratec engine and has had its suspension and steering tuned for sporty, dynamic driver appeal.

"The Streetka is the jewel in the Ka crown. There's nothing out there that matches its looks or appeal - it's a sure-fire winner," says Paul Thomas, managing director, Ford Motor Company Limited.

Streetka looks identical to the Turin show car because Ford's original design brief was to exactly replicate the lines of the one-off concept car, with modifications limited to making it a safe and road-legal road car.

The rakish windscreen has been shortened to enhance Streetka's roadster appeal, while the doors boast frameless windows that do not impede on the car's clean roof-down lines. There's no B-pillar either, enhancing Streetka's uncluttered looks - a pair of integrated steel roll-over bars that sit behind the driver and passenger seats are the only projections above Streetka's waistline when its hood is stowed away.

Streetka's sassy behind is just as eye-catching. The re-engineered boot lid features a centrally-mounted brake light and reversing lamp. The lid curves down to meet the bumper that flows around the bold wheel arches and creates an aerodynamic spoiler - a feature not seen on the concept model - that enhances Streetka's high-speed stability.

The other striking feature of the rear bumper is the pair of recessed two-part light units. Dedicated Streetka badges are located just ahead of the rear wheels and the brightwork scuffplates on the door sills are inscribed with the Pininfarina name. Streetka rides on six spoke 16inch alloy wheels, generously shod with 196/45 profile tyres that have been specifically developed for Ford.

Streetka has already found the perfect partner to match its exuberance and dynamism - Kylie. It has been the key sponsor of Kylie Minogue's sell-out 2002 'Fever' concert tour and has made a few teaser outings before its official Paris Motor Show debut to whet the public's appetite.

Streetka's interior ambience and simplicity is complemented by unique details that befit its status as style flagship of the iconic Ka range. Predominantly ebony black, the cabin is peppered with jewel-like brightwork touches like the Puma-inspired aluminium ball gear-knob, metal-look bracelets on the arms of the leather-clad steering wheel and the aluminium framing of the oval clock.

Driver and passenger are gripped by upgraded sport seats trimmed in black twill fabric. The chairs are positioned lower than in the standard Ka for an enhanced sporty feeling. The ultimate Streetka will also be available with heated leather seats and additional interior features that will satisfy the Streetka customer's desire for both a stylish exterior with a matching luxurious interior.

These design details are complemented by a new instrument cluster that features an interlinked speed, rev and fuel counter with white on black graphics. No rag-top roadster is complete without a powerful audio system - Streetka comes with a Ford 6000 TDS/EON radio and CD player playing through four integrated loudspeakers. The more advanced 6006 system with in-dash six-CD player is an option.

Streetka owners can drive roofless in less than half a minute. The manually-operated fabric hood - seen on the show car - unclips from the header rail and folds away beneath the flush-fitting rear cover in a seven-step operation that can be easily undertaken by one person.

Beneath the roof mechanism - where the rear seats would be in the standard Ka - is an additional storage space that means Streetka can accommodate a golf bag with ease. A smaller lockable cubby box for storing compact discs and sunglasses is situated in between the two seats. Total stowage space is 188 litres. An interior sensing alarm is fitted as standard for top-down security.

After Streetka's rapturous reception at the Turin Motor Show two years ago, Ford moved quickly to find a financially viable way to bring Streetka to the public. Already in preliminary discussions with Italian coachbuilder Pininfarina, Ford saw the opportunity such a liaison might generate. With its flexible production facilities and celebrated design skills, Pininfarina was the ideal partner, and the production go-ahead was given in May last year.

Transforming Ka into Streetka required modifying every external body component, bar the bonnet and front headlight assemblies. Working closely with Ford, Pininfarina's engineers used computer-optimised design to build in a high degree of torsion stiffness into Streetka's chassis to compensate for the lack of hard roof.

To reinforce the vehicle in a crash situation, the chassis has been laterally enforced. The lower rocker panels were reinforced with a rigid box-structure with a combined thickness of 6.8mm - well above the 1.6mm sheet metal employed in most standard production cars.

The steel rollover hoops are mounted on an additional rear traverse bulkhead and Streetka's nose benefits from a further structural crossmember. Together they both provide even higher levels of torsional strength. Pininfarina's engineers have also made extensive use of laser-welded blanks. These comprise different gauges of steel laser welded together, providing strength where it is needed, and lightness to lower kerb weight.

Providing a rock-solid base, the strengthened floorpan not only dramatically reduces scuttle shake, the bain of roofless cars, but ensures Streetka meets both legislative and Euro NCAP targets and Ford's stringent safety standards.

Dual front airbags - the passenger airbag featuring a deactivation switch - are standard with the further option of side airbags. This safety package is enhanced by the standard fit four-channel anti-lock brake system with electronic brake force distribution. They operate on 258mm ventilated front disc and 203mm rear drum brakes, and the single-pot callipers have larger than standard asbestos free brake pads.

As befits its status as the style flagship of the Ka range, Streetka is powered by a new 1.6-litre Duratec engine that develops a lusty 95PS at 5,500 rpm and 135 Nm at 4,250 rpm. Built in South Africa, the 8-valve engine has been designed to deliver muscular mid-range response, imbuing Streetka with exceptional urban agility and motorway overtaking capability. Nearly 90 per cent of maximum torque is available between 1500-4500rpm.

Developed specifically for the European market, the 8-valve engine complies with stringent Euro IV emissions legislations. It features a low-friction overhead cam valvetrain operating valves opposed at 16�. On the combined cycle the electronically fuel-injected unit delivers 34.7mpg and has a CO2 emissions rating of 190g/km. It powers the front wheels through a close-ratio five speed manual gearbox and exhales through an exhaust system acoustically tuned to deliver a sporty note at idle and under acceleration.

Streetka's engineers were committed to ensuring its modified platform delivered on Ford's unrivalled record of dynamic handling and ride qualities - key to Streetka's character. To this end Streetka rides on a heavily revised front and rear suspension. The enhanced rigidity of Streetka's chassis provides ultra-stiff mounting points for this modified suspension.

At the front, the track has been widened to 1417mm, 22mm wider than the standard Ka. The MacPherson strut suspension now boasts off-set uprated springs - 12.5 per cent stiffer than standard, a thicker anti-roll bar that's increased from 15 to 17mm and completely new dampers. The result is a 27 per cent increase in roll stiffness, equating to enhanced cornering stability and sharper, more aggressive front end bite when turning into corners.

Streetka's rear suspension is entirely new. The wider 1452mm rear track has allowed Ford to fit a wider and stiffer twist-beam layout which offers increased toe-in stability and heightened camber stiffness during cornering. In comparison with the standard Ka, Streetka's V-shaped twist beam is 14.6 per cent thicker and is fitted with thicker tubular arms and reinforced gussets. The result is an 18 per cent increase in longitudinal stiffness.

Streetka's rack and pinion steering has also been tuned for improved precision and responsiveness. The power-assisted system is fitted with friction-reducing elements to provide a direct, linear feel. It has been quickened too and only requires a quick 2.6 turns between locks.

Particular attention has also been paid to Streetka's refinement levels to isolate the driver from road and powertrain noise and vibration. The Duratec engine is mounted on a new hydromount, similar to that used in the award-winning Ford Focus. Tuned to the specific characteristics of Streetka's engine, the hydromount dramatically reduces the level of vibration and noise transferred into the cabin. The remaining two engine mounts were stiffened by a further 25 per cent.

Additional sound-deadening material was added at the front between the engine and passenger compartment, and at the rear between the luggage and soft-top cavities to isolate the cabin further.

"Streetka is an accomplishment on many levels. It further extends our line-up of exciting and stylish models, it demonstrates how derivatives can quickly and accurately tap into customer appeal and it's the most tangible example yet of Ford's commitment to produce fun, stylish and affordable cars. Streetka is a winner in every sense," concludes Paul Thomas, managing director, Ford Motor Company Limited.