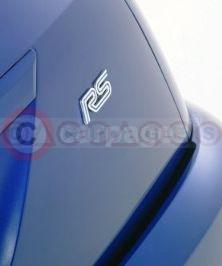 Thirty-two years ago, in 1970, Ford introduced its first-ever RS-badged car, the Escort RS1600. The RS (Rallye Sport) marque has been an integral part of Ford's sporting image ever since.

Over the years, the Rallye Sport name has been applied to 19 spectacular road cars, spanning Fiesta, Escort, and Sierra. The 'RS' badge has never been applied lightly and each and every model has offered outstanding performance, roadholding, safety and value for money.

RS-badged Fords have always shared a proud sporting tradition, but have been built in many different forms. They have been front-engined or mid-engined; front, rear or four-wheel-drive; four-cylinder or six-cylinder; normally aspirated or turbocharged.

Many have employed wind tunnel testing to evolve innovative aerodynamic features, such as the rear wings fitted to Ford Sierra and Escort RS Cosworths. All have pushed the boundaries of performance car technology, and all have been successful in motorsport.

The original RS-badged Ford - the Escort RS1600, was the first-ever Ford to use a 16-valve twin-overhead-camshaft engine, and the first to be assembled in the new Ford Advanced Vehicle Operations (AVO) factory at Aveley, Essex. It also became the first Ford model to be sold through an expanding network of specialised Rallye Sport dealerships.

Like many of the RS models that followed, the RS1600 (and its close relation, the single-cam engined RS2000) found worldwide success in races and rallies, such as the East African Safari rally of 1972, three RAC rallies, and the European Touring Car Championship of 1974.

Ford Capri RS2600 and RS3100 models were not only high-powered flagship versions of Ford's best-selling coupe, but also won scores of races, including the European Touring car Championships of 1971 and 1972.

Three Mk II RS Escorts made headlines in the late 1970s, with the uniquely styled quad-headlamp RS2000 becoming the best-selling RS model of all time. Escort RS1800s won more rallies than any other British car, won the World Rally Championship for Makes in 1979, and provided power for both Bjorn Waldegard (1979) and Ari Vatanen (1981) to win the drivers' titles.

In the 1980s the front-wheel-drive RS1600i was the first Escort to use a fuel-injected engine, and the first to use a five-speed gearbox, while the Escort RS Turbo was the first production Ford to use a turbocharged engine, and a viscous-coupling limited-slip differential. Both cars were successful in Touring Car racing, especially the RS Turbo, whose 1.6-litre engine could produce up to 270bhp.

The mid-engined RS200, of which only 200 cars were ever made between 1984 and 1986, was intended for Group B rallying, and featured a race-bred steel and carbon-fibre chassis, a turbocharged Cosworth BDT engine and four-wheel-drive. Strikingly styled by Ghia, the RS200 was at once the most exclusive and the most expensive Ford on sale.

During the 1980s, the Cosworth YB-engined 150mph Sierra RS Cosworth family became successful as fast, value-for-money, road cars, while the RS500 derivatives were so dominant in motor racing that the rules of entire Championships had to be re-cast to make sure they did not win every race, every time.

The final Sierra RS Cosworth was a sophisticated road car with four-wheel-drive, and a shortened version of that platform, along with a 227bhp engine, was used for the Escort RS Cosworth, whose extrovert aerodynamic package ensured positive downforce at all road speeds.

In the mid-1990s the Escort RS Cosworth returned Ford to the top of rally standings, including victory in the 1994 Monte Carlo Rally - and it also inspired the birth of the Escort World Rally Car of 1997-1998, which brought that pedigree to a nostalgic close.

During the 1990s, two superfast versions of the front-wheel-drive Fiesta were developed - the RS Turbo, with a turbocharged CVH engine and the RS1800, with the award-winning Zetec 16-valve unit. At the same time there were the distinctive front-wheel-drive and four-wheel-drive Escort RS2000 models, the first Fords to use the smooth and torquey DOHC 16-valve engine, which was later fitted to many Scorpio and early Galaxy models.

With the Ford Focus RS, the Rallye Sport brand is once again an integral part of Ford's performance car line-up. This latest addition to the performance family will continue the tradition of Ford RS high performance vehicles that are developed by enthusiasts, for enthusiasts.