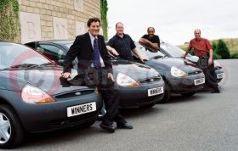 Parts Plus, Ford’s national network of specialist parts wholesalers for the independent motor trade, has handed out hundreds of high-value prizes, including four Ford Ka’s, after its latest sales promotion campaign.

The Parts Plus ‘Treble Top’ promotion, which ran from April to the end of June, was open to proprietors of independent garages, through their local Parts Plus suppliers. Four star-prize winners each received a Ford Ka 1.3i, while hundreds of other winners collected top-brand camcorders, TV-video combination sets, DVD players, CD players, cameras, watches and, in line with the darts-themed promotion, Parts Plus-branded dartboards.

The winners of the four cars attended a presentation event in August at the Heritage Motor Centre, Gaydon, Warwickshire, home to the largest collection of historic British cars in the world. Following a tour of the museum and a celebration lunch, the winners and their guests were whisked off by helicopter to Daventry, Northamptonshire, for a tour of the vast Ford Parts Distribution Centre.

The winners received their car keys from Simon Psaila, Director of Ford Customer Service Division, who told them: "We know the aftermarket is changing radically, we’re certain of your future role within it, and we’re committed to adapt our service to meet changing market needs."

Future Parts Plus promotions will be detailed on the Parts Plus website (www.fordpartsplus.co.uk ) and in Parts Plus Magazine, which is distributed to 40,000 independent garages and workshops nationwide.