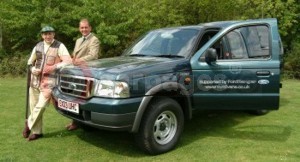 Sir Jackie Stewart, a patron of the National Gamekeepers Organisation (NGO), attended a shooting event in West Wycombe, Buckinghamshire, last month where Ford handed over a new Ranger to the organisation's National Co-ordinator, Paul Tyrer, in support of its work.

The National Gamekeepers Organisation was founded in 1997. It was set up to promote, improve and protect the interests of gamekeepers, in response to the public misunderstanding and poor representation that surrounded the profession. Gamekeeping has a very long history in Britain, dating back to medieval times, and today there are 3000 full time gamekeepers in the UK and a similar number who do the job part time. Their main work is to help pheasants, partridges, hares and grouse to thrive in the countryside.

Ford has provided support to the NGO by donating a new Ford Ranger Super Cab to keep the charity's organisers mobile. Since its launch in 1999, the Ranger pick-up has become established as a class leader in several key respects including carrying capacity, access and load flexibility and ride and handling. This makes it a 'go anywhere, do anything' vehicle meaning whatever the task, it will get the job done, and is an ideal work partner for gamekeepers. The Super Cab, with its innovative reverse-hinged rear doors which allow unrestricted access to the interior, is perfect for the NGO to keep valuable equipment safe but easily accessible.

The Ranger handover was attended by Sir Jackie, who is very proud to be a Patron of The National Gamekeepers Organisation Charitable Trust. He has had a strong and long association with Gamekeeping, starting under the guidance of his Grandfather from a young age, and going on to compete nationally in shooting. It is a little known fact that Sir Jackie was a world champion clay pigeon shooter prior to becoming a world champion motor racing driver. This has come to be one of the most important ingredients in Sir Jackie's life. "I have never lost the enjoyment and appreciation of what role gamekeepers play in rural Britain. The country would be a poorer place without them and the job they do is enormously important for the environment," he said.

The new Ford Ranger is among the best equipped of pick-ups in its class as well as being one of the most competitively priced. Priced from just £10,982, key enhancements for new Ranger are: ABS as standard on all 4x4s, remote locking on Super and Double Cabs, improved brakes, ride, handling and NVH. Plus improved towing capability – up to 2800kg from 2200kg on 4x4 models. Every new Ford Ranger is protected by 12 months unlimited mileage manufacturer's warranty, plus, starting from the date of registration, a three years/60,000 miles Ford Protect Plan including three years RAC cover. New Ranger also has a 12 months anti-corrosion warranty and cover against perforation from inside out, caused by faulty manufacture or materials, for six years from the delivery date.