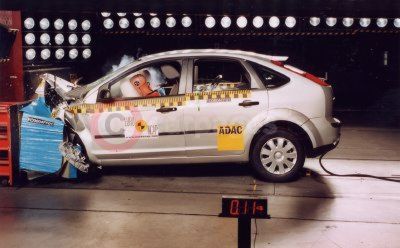 In the latest phase of Euro NCAP safety tests, the new Ford Focus has been awarded a best-in-class five star occupant protection rating.

The new Focus has also become the first and only vehicle to be awarded by EuroNCAP a 100 per cent occupant safety rating for both offset frontal and side impact test modes, and to have achieved 100 per cent for child dynamic injury protection for 1½ and 3 year old child crash test dummies. No other car has achieved such an outstanding safety performance in any Euro NCAP test phase.

Adrian Hobbs, Secretary General of Euro NCAP said: "The Ford Focus achieved the highest score for occupant safety ever achieved since we began testing new vehicles seven years ago and this makes it the best performing vehicle in its class. Our procedures and protocols are recognised the world over as the most rigorous and exacting, but the Ford product development team has helped raise the benchmark in terms of safety - giving other manufacturers something to strive for."

In addition, the new Focus achieved top honours in two independent neck injury evaluations carried out by Folksam and the International Insurance Whiplash Prevention Group (IIWPG). This performance is extremely important as neck injuries in rear impact make up 75 per cent of all personal injury claims in Europe.

New Focus is a Class Leader

Throughout the bodystyle range, the new Focus has a structure that was designed to protect its occupants within a lightweight and highly efficient survival cell. It’s constructed from variable-gauge laser-welded panels of high strength steel. Both the occupant cell and the surrounding energy-absorbing crush zones have been rigorously tested in virtual and physical form, verified by the most powerful computers in the industry and tested in a state-of-the-art safety centre.

More crush space has been achieved by a controlled detaching of stiff chassis components from the body structure underfloor, which allows the impact energy to pass beneath the rigid passenger cell, reducing the deceleration values for the occupants and avoiding deformation of the underfloor structure.

The structure includes such features as new compression members inside the door waist to reduce the A-pillar and instrument panel beam deformation and a new straight cross-car beam bolted between the A-pillars, which stabilises the body side structure and minimises the intrusion of the steering column and pedals.

These structural features combined with advanced passive safety systems set a new standard of crash protection for the Focus brand. As a result, the new Focus exceeds the crash performance criteria of all current European legislation and is performing strongly in independent testing programmes, such as Euro NCAP.

Efforts to create a higher quality appearance have also resulted in easier and more cost-effective repair processes. One such example is the boron grille opening reinforcement beam. In previous designs, separate components were mounted to a wide variety of points, making it exceptionally hard to ensure consistency in terms of alignment and gaps. The new design eliminates variations in lines or gaps by being mounted into fixed points. If damaged in an accident, it can be replaced to fit exactly as the vehicle left the production line.

Ford of Europe's Vice President of Product Development, Derrick Kuzak, commented: "We are delighted that the results of the Euro NCAP test have confirmed our rigorous internal testing standards. In the new model, we wanted to set new levels of crash protection for the Ford Focus brand. In doing so, we have created a new standard for the mid-sized family car class."