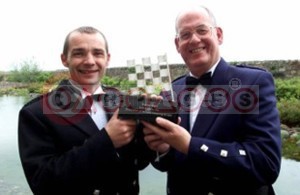 The Kincardine-based Scottish motorsport competitor who, in 2001, became the first Scot to win the British Hillclimb Championship, was presented at the weekend with the Jim Clark Memorial Award at a ceremony in St. Andrews.

Graeme Wight Jnr (32) received the Award from the president of the Association of Scottish Motoring Writers, Graeme Giles.

The Jim Clark Memorial Award is given to a Scot or Scots who have achieved excellence in the field of motoring. The citation to Graeme reads: "The Association of Scottish Motoring Writers presents the Jim Clark Memorial Award for 2003 to Graeme Wight Junior in recognition of his status as twice British Hillclimb Champion and outright record-holder at five hillclimb courses in Scotland and England.

"Graeme's success in his chosen form of sport have never been remotely approached by any other Scottish driver. The ASMW applauds his speed, skill, consistency, determination and courage."

Graeme is currently leading the hillclimb championship in 2003 and is hoping to make it a hat-trick of successes this year, having taken the title again in 2002.

This is the 33rd year the Award has been presented, making it one year older than Jim Clark was in 1968 when he died in a racing accident at the Hockenheim circuit in Germany. Since its inception the Award has been supported by Ford Motor Company Limited as it was Jim Clark who, in a Lotus 49 at the Dutch Grand Prix in 1967, gave Ford its first ever formula one win with the new Ford-Cosworth grand prix engine.