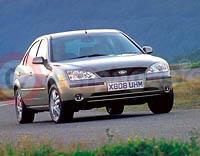 The new Ford Mondeo has been named as Britain’s best used car in the annual What Car? Used Car of the Year awards.

‘This represents staggering value for money, considering that even when new it’s way above most of its rivals.’ said What Car? editor Rob Aherne.

‘Best of all, the previous owner has soaked up most of its depreciation.’

The Mondeo wasn’t the only award-winning Ford. For the second year running, the Focus claimed the Best Used Small Hatch title, the Galaxy won Best Used MPV and the Puma was named Best Used Sports Car.