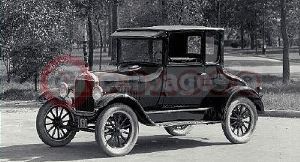 Over 40 entries have been received for the Ford Model T Challenge, four times as many as the company anticipated when the competition - for enthusiasts to restore Ford Model Ts - was announced in 2002.

Entrants come from a variety of backgrounds and from as far afield as Orkney and Cornwall. They include a Church of Scotland minister, a scientist researching nanotechnology, a father-and-daughter team, a stone mason and a marine surveyor.

The Model T Challenge is just one of many activities which will celebrate Ford's 100th anniversary this year. The entries will be judged at the Haynes Motor Museum near Yeovil in Somerset, on May 31 and June 1. First prize is a cheque for £5,000.

"The great thing about this competition is that when the judging has been completed, there will be 45 more working Model Ts on the roads than was the case in early 2002 when the project was first announced, " explained Daniel Ward, executive director, public affairs for Ford of Britain.

The Model Ts being restored include Tourers, Depot Hacks, One Ton Trucks, Pickups, Town Cars and at least one racer. The majority of these cars were purchased either in completely derelict condition, or as a collection of rusty components.

Most have been restored by the entrants and their families working in their garden sheds or garages, with professional help called in only for major engineering and machining tasks.

The competition was the idea of Neil Tuckett, whose company Tuckett Brothers of North Marston, Buckinghamshire, supplied basic unrestored vehicles and original components to entrants for a cost not exceeding £3,000. Neil has been collecting, restoring and selling Model T Fords on his farm in Buckinghamshire since 1984.

The judges will not be looking for restoration to concours standard – anything from a rolling chassis with tax and MoT up to a "factory gate" standard car will be eligible for a prize, as long as it represents an authentic Model T at some stage of its working life.