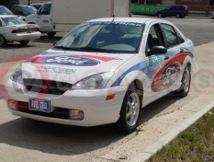 The all-new, three-door, Ford Fiesta will lead a line-up of 62 vehicles on the Ford stand (Hall 4 stand 4020), at this year’s British International Motor Show at the NEC, Birmingham next month. As well as making its UK debut, pricing will be announced for the latest Ford supermini.

A secret vehicle will be unveiled at the Show for its international debut. Watch this space for more details.

An insight into the possible future of Britain’s best-selling car will also be on display in the Focus C-MAX Concept. Another UK debut, this signals Ford’s thinking on this fast-growing segment. The result is a concept for a modern family vehicle with contemporary style, appealing technology and features that help to extend an active lifestyle.

Ford’s most advanced environmental vehicle, the Ford Focus hybrid fuel cell vehicle (FCV) concludes its European testing tour at the Ford stand. This vehicle is the first in a small Ford fleet, which will be used in test programmes with customers during the next few years. During recent test programmes, the Focus FCV has demonstrated 160-200 miles (250-320 kms) of operating range - a significant improvement on previous fuel cell vehicles. The top speed has for technical reasons been limited to 80mph (128 kph).

The prominence of the new Ford sporting stable will be evident on this year’s stand with the Focus RS leading the pack. Raring to get into the hearts of everyone looking for a performance car to get them noticed, the Focus ST170 and Mondeo ST220 will also be turning heads throughout the Show.

Heads will be swivelling when visitors see two more UK debuts on the stand in the shape of Ford's sexiest roadster, Streetka and the zesty new Sportka. The contemporary edge of the Ka range will be evident for all to see, with Streetka the jewel in the crown of Ford's iconic Ka design. Sportka will mean that all the fun and pleasure of Ka motoring will be available with enhanced performance and greater agility.

Ford is renowned as the monarch of a British institution –the Ford Transit, the best-selling commercial vehicle in Britain for 36 years. The British public will get to see Ford Transit’s new brothers, the Transit Connect and Tourneo Connect. Not content with inheriting Transit's class-leading attributes, the Transit Connect has already started winning its own awards, including What Van? Van of the Year for 2002.

The commercial vehicle genetic story does not end there. Among a large display of commercial vehicles, the new-generation Ford Ranger will make its UK debut. It has now inherited more of Ford's American F150 truck series look. This will be the first opportunity the public will have to see the pillarless cab design that will be unique on UK roads next year.

With 11 of the vehicles on the stand being newly on sale this year, visitors will be able to leave contact details with staff on the stand in order to arrange to experience the driving quality of Ford's contemporary line-up.

With an international unveiling yet to be announced, eight UK debuts, a Destination Football café and a stunning acrobatic show, the Ford stand will be on every visitor’s must-see list at this year’s Show.