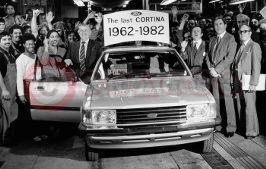 Only 21 months after the original body style had been approved, the first Cortina production car rolled off the new assembly line at Dagenham, in Essex. By the time the Cortina was revealed on September 21, 1962, four different 1.2-litre types were already in the showrooms – two-door and four-door saloons, to Standard and De Luxe specification with a choice of central floor-mounted or steering column gearchange controls. No fewer than 67,050 cars were produced before the end of that year,

In the meantime the specialised Lotus-Cortina – a two-door saloon which not only featured a 105bhp/twin-overhead-camshaft engine, and coil spring rear suspension, but many light-alloy body panels – had already been previewed. Deliveries of this type, which was intended for motorsport use, began during the spring, with the first racing successes following in September.

In the next three years there was continuous change and improvement. 1964 models featured a new instrument panel layout, Borg Warner automatic transmission became optional in 1.5-litre models, then for 1965 the company introduced the important innovation, of Aeroflow (through-flow) cabin ventilation. The sensational Lotus-Cortina was given new-type leaf-spring rear suspension in mid-1965.

By the summer of 1966, the Cortina had earned more than £250 million in export sales, and the millionth car was built. Then, in October 1966, a new-shape Cortina, the Mk II, took over. Using the same basic platform and running gear, there was a completely new body style. Two-door and four-door saloons were launched at once, the estate car version followed in February 1967 and a new-type Lotus-Cortina in March.

From October 1967 the Mk II range was further up-rated, not only by the fitment of new cross-flow 1.3-litre and 1.6-litre engines, but by the addition of a luxuriously trimmed 1600E model, which combined 1600GT performance, Lotus-Cortina handling and unique high-specification furnishing.

1969 models were further improved, notably with new manual transmissions, new facias, and the availability of reclining seats on more models in the range. From this point, the Lotus-Cortina officially became the Cortina Twin-Cam, though without mechanical changes. By this time, no fewer than 14 different Cortina types were available.

The Mk II Cortina sold even faster than the original type, with well over one million manufactured in a four year period.

Although the existing engines were carried forward, the Mk III range, introduced in October 1970, was in all other respects entirely new. No longer than before, it nevertheless had a 3.5in. longer wheelbase, being wider and lower than the previous type.

The sweeping new style hid a new family of ‘Pinto’ overhead-camshaft engines, the largest of which was a 98bhp 2.0-litre which guaranteed a top speed of over 100mph: there was no Lotus derivative. Other innovations included wishbone front suspension and coil spring rear suspension.

Although the new car shared its platform with a new model Ford from Germany, the Taunus, the Cortina Mk III had a unique style: as expected, two-door and four-saloons and an estate car shared four engines and five trim/equipment packs. This was a time when Ford offered a wide choice of factory-fit options and accessories, including automatic transmission, and cross-ply or radial ply tyres.

In the early 1970s, the Mk III range was simplified and in 1972 a new type of Ford automatic transmission – the C3 – was made available. Then, in October 1973, the design was refreshed, with new smaller versions of the ‘Pinto’ engine, new grille styling and a new fascia. At the same time the top-of-the-range 2000E was added to the line up.

Although inflation in Britain made it difficult to hold down prices, the Cortina was always a best-seller, made even more attractive in October 1975 by Ford’s ‘Value for Money’ equipment enhancement package. Later, to face up to post-energy crisis fuel economy requirements, a new ‘economy’ Cortina 1300 was introduced in February 1976.

By the summer of 1976, the Mk III had became the best-selling Cortina so far – but a new version was already on the way.

The Mk IV range was introduced in September 1976, with a brand-new and stylishly more angular shape than before, which was built up on the same well-proven platform and running gear as the ultra-successful Mk III.

Once again this was a wide range of saloons and estate cars, with engines spanning 50bhp/1.3-litres and 98bhp/2.0-litres at first. In place of the GT versions, there was now a Cortina S, while the most completely trimmed and equipped models were badged Ghia. One year later, in October 1977, a 108bhp/2.3-litre V6 engined version of the car, the flagship of the range, was made available. This was now the most complete Cortina range so far, for at this time there were 20 derivatives, their prices spanning £2,523 (1300 two-door) to £4,795 (2300 Ghia estate).

Only three years after the Mk IV had been introduced, in September 1979, a significantly revised version of the range, officially to be known as the Cortina 80, was unveiled. Although it was never officially called the Mk V, this title was adopted by many Cortina enthusiasts and customers, and was the type which carried the Cortina range successfully to the end of its career in mid-1982.

Although based closely on the Mk IV, the style and specification of the Cortina 80 was improved, not least with more glass area in the cabin, a lightened shell and subtle changes to the grille, tail lamps and many of the skin panels.

The engines had all been improved, to make them at once more powerful and more economical. Now there was a choice of five different power units, which spanned 61bhp/1.3-litres to 116bhp/2.3-litres, there were Base, L, GL and Ghia equipment packs, saloon and estate car types, totalling no fewer than 20 derivatives. It was then also possible to specify an S (for ‘Sporting’ wheel/suspension package), or a ‘Heavy Duty Pack’ which made the cars even more suitable for poor surface and high-load-carrying duties.

This ensured that the Cortina 80 sold as well as any of its predecessors, especially in 1981 and 1982 when two popular special editions, the Carousel and the Crusader, were made available and after a final facia/equipment up-grade was made to all models in September 1981.

Finally, after a wonderful career which had spanned 20 years, in which more than 4.3 million cars had been produced, the very last British-built Cortina was completed at the Dagenham plant in Essex on July 22, 1982. It was immediately replaced by the Sierra, which soon built up its own best-selling reputation.