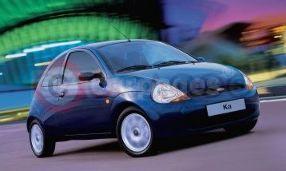 'Ka has been important to Ford. It has brought new customers to the marque, while gaining status as a modern icon. The Streetka and Sportka variants will broaden its appeal still further, demonstrating the unique way in which Ka’s design simplicity and purity have inspired personalisation. Bringing derivatives like these to life is central to our product-led transformation of the Ford brand in Europe'. Martin Leach - President and Chief Operating Officer, Ford of Europe

The Ford Ka was introduced to the world six years ago bringing original thinking to the sub-B car sector, at that time new territory for Ford. The Ka pioneered New Edge design – which has won it three major international style awards – in a low-cost, innovatively engineered, fun-to-drive package.

Since its launch, over one million Ka models have rolled off the Valencia assembly line in Spain. Many of those have been destined for ‘virgin’ Ford buyers lured to the brand by Ka for its style, an important purchase motivator in the sub-B class.

Ka has a loyal following, boasting Ford Ka Owner Clubs in the UK, Turkey, Japan, and the Netherlands, and it has inspired over 20 limited edition models among the European markets.

The Ka line-up revealed at the 2002 Paris Motor Show confirms Ford of Europe’s commitment to its baby, with the unveiling of an enhanced Ka and the introduction of two new family members: the stylish Streetka two-seat roadster and the lively, fun-to-drive Sportka.

The original icon keeps its celebrated looks but benefits from an all-new engine, the 1.3-litre Duratec 8V, as well as colour, trim and feature updates.

Streetka, the first sub-B convertible from Ford, is the car that made it into series production ‘by popular demand’. Originally presented as a design concept by Ghia, it was the star of the 2000 Turin Motor Show. The media and public were won over by the transformation from four-seater hatchback to two-seater roadster with distinctive front and rear styling.

Such was the reaction that Ford of Europe enlisted the specialists Industrie Pininfarina SpA, of Turin, Italy, as engineering partners to produce a limited production run of Streetkas to Ford’s exacting quality standards, while keeping true to the show car’s original intent. Streetka will go on sale early in 2003.

Completing the trio at Paris is the ‘edgier’ Sportka, which brings the looks and demeanour of its sister Streetka, to the original hard-top Ka body, along with the more potent 1.6-litre Duratec 8V engine. The Sportka will be available in the second half of 2003.