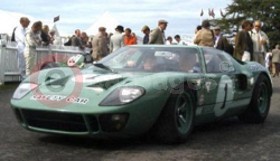 Three very special vehicles from the Ford heritage collection, driven by equally special guest drivers, will be starring at the Shelsley Walsh Hill Climb Festival to be held over the weekend of August 15-17.

Current British Hill Climb Champion, Graeme Wight Jnr, will swap his Gould single seater racing car - in which, last year, he became the first person ever to go up the Shelsley Walsh course in less than 25 seconds - for the March 701 in which fellow Scot Jackie Stewart won the 1970 Spanish Grand Prix. The March Grand Prix car was re-commissioned by Ford earlier this year after many years of inactivity and was driven by Ford of Europe president Martin Leach at the Goodwood Festival of Speed in July where it did not miss a beat.

Former grand prix driver and team manager Jackie Oliver will take the wheel of the Ford GT40 MKI which has been in the company's ownership from new. It was initially run by Alan Mann Racing and driven by Sir John Whitmore and Graham Hill among others. It has represented the company at numerous Le Mans pre-race cavalcades and has regularly been – with another Ford-owned GT40 – one of the course cars for the Goodwood Revival race meeting. Earlier this year it was in the USA where it played a key role in the introduction of the all-new Ford GT.

Editor-in-chief of "Autocar" magazine, Steve Cropley, will be sitting in the seat once occupied by Hannu Mikkola for 16,000 miles when he takes the Ford Escort rally car FEV1H up the hill climb course. Mikkola and his co-driver Gunnar Palm won the London-Mexico City world cup rally in this car in 1970 after an incident-packed run. Looking suitably fresh after a full body and mechanical rebuild last year, this Escort was in spectacular form at the recent Goodwood Festival of Speed where it thrilled the crowds when driven by former champion Ford works rally driver Malcolm Wilson and motoring journalist Mark Walton.

"Ford was delighted to receive an invitation from the Midland Automobile Club to participate in the Hill Climb Festival this year," said Daniel Ward, executive director, communications and public affairs. "It is particularly appropriate that in this, the 100th anniversary year of Ford Motor Company, we attend an event which, it is hoped, will help secure the future of the Shelsley Walsh Hill Climb venue for the next 100 years."

All three Ford vehicles will be running on Sunday, August 17 and it is hoped each will have three runs up the hill.