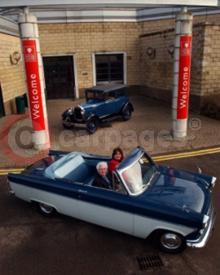 The historic vehicle display at the Heritage Motor Centre at Gaydon in Warwickshire has been boosted with the addition of 16 vehicles on loan from the Essex-based Ford of Britain heritage collection.

The vehicles, ranging from a 1912 Manchester-built Model T through to a 1985 Ford RS 200, are already on display and enhance what is the world's largest collection of British cars.

Roger Putnam, chairman of Ford of Britain, handed over the vehicles to Julie Tew, managing director of the Heritage Motor Centre. He said: "Ford has a very proud history in Britain going back 100 years and the vehicles now on public display at Gaydon, represent some of the finest products produced by the company for British motorists."

Milestone Ford cars now at the museum include the last Cortina ever made, the last Capri and an example of Britain's first – and only – £100 new car, the Ford Model Y from the 1930s.

Motorsport, a word synonymous with Ford, is also represented in the display by the Ford Escort, which took Hannu Mikkola and Gunnar Palm to victory in the 1970 London-Mexico World Cup Rally and a replica of the Ford Zephyr 6, which won the Monte Carlo Rally in 1953. The Zephyr was driven to victory by the Dutchman Maurice Gatsonides, who went on years later to invent the 'Gatso' speed camera.

The selection of Ford cars will be on display in the main museum, which is open to the public daily (except 24-26 December) from 10a.m. until 5p.m. Museum admission charges are: £8 adults, £7 concessions, £6 children (5-16 years) under fives Free. Further information is available at www.heritage-motor-centre.co.uk