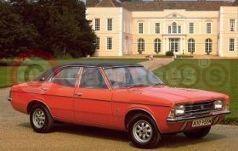 Forty years ago, on September 21, 1962, Ford's new Cortina was launched. Costing £573 for the standard 1200 saloon, it became an instant best-seller and enjoyed a 20 year career in which 4.3-million examples were produced.

The last Cortina was assembled in July 1982, to be succeeded by the Sierra, by which time the entry-level model was priced at £4,515.

The Cortina was so successful and so different from other cars in the industry, that in Britain it inspired what became known as 'the Cortina class'. Once established, at times one in every six cars being built in the UK was a Cortina. Along with the parallel success of the Escort from 1968, this helped Ford gain market leadership in Britain, which it has now maintained for more than 25 years.

"The popularity of the Cortina throughout its lifetime is confirmed by the amazing sales statistics of the period," said Ford Motor Company Limited chairman, Roger Putnam. "In 1967, the Cortina MkII alone took 14.9 per cent of the UK new car sales market and in its best sales year ever, 1979, just under 194,000 Cortinas were sold in Britain."

In 20 years, four distinctly different generations of Cortina were put on the market - each of them selling more than a million examples around the world.

Conceived in 1960, the new car, code named 'Archbishop' until the Cortina name was adopted, was intended to fill out a range in which the Anglia 105E and Zephyr/Zodiac models were prominent.

Roomy yet compact, light yet strong, technically simple but amazingly versatile and with many derivatives, the Cortina was a completely new type of British Ford.

When originally planned, Ford thought it could sell at least 100,000 Cortinas every year - yet more than 260,000 Cortinas, with their trademark bodyside flutes and 'ban the bomb' badge-style rear lamps, were sold in the first full sales year, 1963.

Those highly distinctive rear lamps on the MkI very nearly didn't make the production car at all. Charles Thompson, one of the design team, recollects: "We were going to have neat strips of angled lamps and the body tooling was well underway. Then there was a last minute change of mind and the circular lamps were adopted instead."

The Cortina was the mainstay of Ford's assembly plant at Dagenham in Essex throughout the 1960s and 1970s. Many other Cortinas were also built in Ford plants overseas - in Australia, South Africa, Amsterdam, Cork, and Genk (Belgium).

Derivatives of the Cortina - particularly the GT and the Lotus-Cortina - won races and rallies all around the world in the 1960s. Formula One World Champion Jim Clark, and the 'Bearded Baronet' Sir John Whitmore won race championships in Britain and Europe. 'Works' GTs and Lotus-Cortinas, prepared at the Boreham motorsport centre, also won the East African Safari, and the RAC rallies, two of the world's toughest endurance events.

Cortina was named 'International Car of the Year' in 1964 for motorsport achievement by the Swiss motoring magazine 'Auto Universum'.

A Car For Everyman

Like other cars in Ford's heritage, over the years the Cortina offered something for everyone. Because there was always a wide choice of engines, body shapes and trim packs, customers from all walks of life could find a car exactly suited to their needs.

Businesses could buy Cortinas for their sales representatives, their managers and their directors, the family man could buy saloons or estate cars with the engine to suit his pocket, while the sportsman could campaign a car which might win on the race track, or in the roughest of rallies.

Ford made sure of this by providing a car which was at once spacious yet fuel efficient, and which was also economical to run and maintain. Even though British car prices in general soared in the 1970s, the Cortina always offered great value for money. In the 1980s, it would need an extra-special car to replace the Cortina - that car was the Sierra.
Published : 13/09/02 Author : Melanie Carter