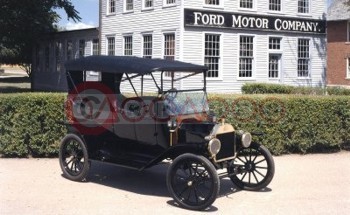 Soccer stars from across Europe arrive in Essex next month to represent their nations in the ultimate test of their footballing finesse. But it won't be household names like Beckham and Ronaldo taking to the field. Instead employees of Ford plants and offices across Europe will do battle for the Ford European Centennial Cup.

Around 200 Ford employees from eight countries will gather to celebrate the company's 100th birthday. Teams taking part on May 17 and 18 will represent every country where Ford vehicles, engines or transmissions are manufactured in Europe.

Squads are travelling from Germany, Belgium, France, Spain, Italy, Turkey and Russia. Ford of Britain will be represented by players from Bridgend Engine Plant, in Wales, following their 2002 victory in the company's British inter plant knock out tournament.

The Ford European Centennial Cup will be at Ford's Rush Green Sports & Social Club, Rush Green Road, Romford. Anyone interested in spectating is welcome to join the Ford employees planning to attend. Kick off is at 10.30am on May 17, with teams playing in two groups of four on day one. Group runners up play for third and fourth place at 10.30am on May 18, followed by a gala final between the group winners at 12 midday. Entry will be free and parking is available.

Ford of Britain Chairman Roger Putnam said: "We are delighted to be hosting Ford friends and colleagues from plants throughout Europe at this 'football fiesta'. The focus will be on employees coming together to play and watch sport and marking 100 years since Ford Motor Company was founded and the first Ford cars, Model As, arrived in Britain."

The BBC's Mark Lawrenson, Garth Crooks and Ray Stubbs will be commentating and there’ll be a display of heritage vehicles including a 1912 Model T.