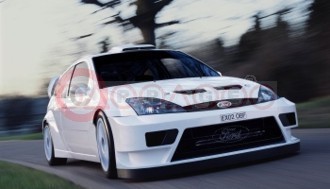 A radical new look hints at the most technically advanced and revolutionary Ford Focus world rally car, unveiled today prior to its competition debut on the Rally New Zealand on April 11.

Significantly different in both looks and mechanics to the 2002 car, the Ford Focus RS WRC 03 is over 80 per cent new and is the first design from Ford Rallye Sport technical director Christian Loriaux. Highlights include radical changes to styling and aerodynamic package, new rear suspension system, improved weight distribution and new, lighter 2.0-litre turbocharged Duratec engine developed and built by Cosworth Racing.

Ford Rallye Sport and Ford’s mainstream engineering teams worked side by side on the project, including assessment of aerodynamic and cooling systems in Ford’s climatic wind tunnel in Cologne.

"I’m genuinely excited by what the team has developed here and I think the car looks sensational," said Martin Whitaker, Ford's European director of motorsport. "Ford is at the forefront of rally technology with this car and I believe it takes the sport to a new, higher level."

Team director, Malcolm Wilson, insisted the revolutionary approach to the new car would not affect the Ford Focus’ record-breaking reliability. "We have enjoyed incredible reliability with the Focus, which has scored world championship points on each of the last 17 rallies, a feat unprecedented in the modern era of the sport. The next step is to raise the performance level and we’re confident that will not be at the expense of overall reliability," he said.

"We've made tremendous weight savings everywhere, with significant help from Cosworth Racing and Pi Research, allowing us to ensure weight is at the minimum level. We could have gone below that figure and so that has enabled us to add weight by strengthening parts in key areas to achieve a weight distribution which best benefits the balance and handling of the car.

Such strengthening included increasing the weight of the roll cage to improve driver safety. The Focus has a reputation for being a strong and safe car but we took the decision that if we could raise driver safety levels to an even greater level then that’s something we should do," explained Wilson.

The Ford Focus RS WRC 03 will undergo the necessary parts inspections by the FIA later this week and is due to be officially homologated as a World Rally Car on April 1. Markko Märtin and co-driver Michael Park and Belgian teammates François Duval and Stéphane Prévot will drive the new cars in 2003. The team’s third pairing of Mikko Hirvonen and Jarmo Lehtinen will continue to drive a 2002-specification Focus WRC for the rest of the season.