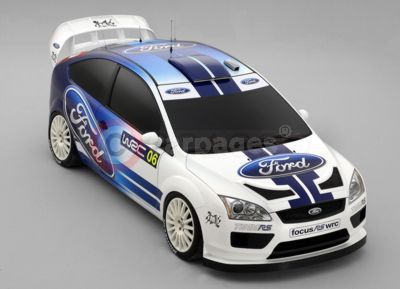 Ford of Europe today outlined its support for a wide-ranging series of motorsport disciplines designed to endorse the Company's exciting new range of road cars. In keeping with Ford of Europe's strong heritage, World Championship Rallying is confirmed as the Company's primary Motorsport activity.

Ford has announced a four-year agreement, representing a major commitment to the FIA World Rally Championship as well as a renewed partnership with their long-standing British-based rallying partners M-Sport.

Lewis Booth, Chairman and CEO, Ford of Europe, said: "We have signed an agreement with M-Sport's Malcolm Wilson which will ensure Ford remains in the series for the next four seasons. From 2006 onwards the Company will be represented by an all-new Ford Focus RS WRC, which will be developed over the course of the next season by M-Sport."

Underlining this in Ford's 'pyramid' of motorsport activities, and following an extensive review of its motorsport strategy, the Company is restating its strong support for a wide range of motorsport activities right down to the 'grassroots'. Cascading down from WRC through Junior World Rally and touring car racing, then Formula Ford single-seater racing and one-make race championships.

"We have carried out a long and comprehensive review of the motorsport scene and Ford's involvement in it. As part of this we have developed a strategy for Ford of Europe which builds on our rallying heritage and confirms support for privateers."

"Our approach to motorsport displays strength in depth, but it is targeted primarily to show the strengths of our road car products and to reach a wide public in the most competitive environment," Booth said.

The Ford Fiesta will also be prominent in the Company's rallying plans. M-Sport will integrate the Fiesta JWRC into its business to develop the car further for customer use in national and international rallying.

On the race circuits, the Fiesta ST Cup will continue in Germany for a third season, while the potential for taking the series into other European countries will be investigated. Formula Ford racers will also benefit as the Company extends its support of the Formula Ford UK Championship into 2005.

Ford has also developed a new Ford Focus touring car concept to explore the increasing popularity of this branch of motorsport. "The new Focus will provide the platform for this touring car initiative. The car is intended to allow customer teams to compete at the highest level of touring car racing, but with the emphasis on producing a competitive car at an affordable price," said Booth.

Ford of Europe's motorsport strategy is built around a dedicated team of specialists called Ford TeamRS, under the leadership of Jost Capito. "Jost and his team have been working hard on producing exciting performance cars. Our new eye-catching Ford Fiesta ST is being launched over the next two months and our plans for a performance version of the new Focus in 2005 are well advanced. I'm sure that our success in competition will showcase perfectly the great products that we will have available for our customers on the road," added Booth.