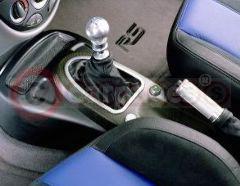 "Ford Focus RS is inspired by our Focus WRC car – an exclusive, ultra high-performance car which revitalises the RS marque and incorporates all the RS brand stands for in driving pleasure, precision handling and heady performance." Martin Leach, President and Chief Operating Officer Ford of Europe

Aggressive style inspired by the Focus WRC, including chassis layout and competition-themed interior

On sale in UK October 2002, with prices announced September 2002

Inspired by the Ford Focus WRC contender and boasting impressive performance credentials of its own, the Ford Focus RS is ready to take its place in RS history, reintroducing the legendary brand to the UK.

Powering Ford Focus RS is a turbocharged, 2.0-litre, Duratec RS engine derived from the mainstream 130 PS Duratec 16v Focus engine. Engineered to be as durable as it is potent, Duratec RS delivers peak power of 215 PS at 5,500 rpm, 65 per cent more than the standard 2.0-litre. Torque output has increased even more, by 75 per cent, to a peak of 310 Nm at 3,500 rpm.

It is the dual personality of this contemporary Ford RS – functionality, comfort and dependability alongside high-performance capabilities.

To create the new Ford Focus RS, Ford assembled a handpicked team of around 60 specialist engineers. Many of them had already played key roles in the development of the Ford Focus, which debuted in 1998, was voted European Car of the Year 1999 and is still acclaimed by many as the benchmark for driving quality.

The RS development team has been given the time it needed to prove out the robustness and dependability of the RS package – such was the determination of Martin Leach (then Ford's Vice President of European Product Development) to get all aspects of the car right.

To ensure this durability, Leach insisted the Ford Focus RS undergo a rigorous testing programme, usually conducted only in the development of new mainstream production cars.

"We truly understand the feeling of urgency among performance enthusiasts to get their hands on the Ford Focus RS," said Mike Kilpin, chief programme engineer. "The return of the RS brand created tremendous excitement and expectation, but we still believe the right thing to do was not to rush this car to market. It’s ready now, and we’re proud of the end result – Ford Focus RS can speak for itself."

Even with its specialised engineering, the new Ford Focus RS was designed for assembly alongside standard Ford Focus models at the Saarlouis Assembly Plant, Germany, where Ford has pioneered its flexible manufacturing process.

Its performance, technology and exclusivity make Ford Focus RS a true interpretation of the legendary Ford performance brand. Starting with the Escort RS 1600 in 1969, RS would become synonymous with "performance" as Ford established a line of more than 20 RS-badged derivatives in the 1970s, ‘80s and ‘90s.

Originally unveiled as a concept car in October 2000, the new Ford Focus RS heralded a new approach to Ford performance cars in Europe. The company has committed to an aggressive performance car development as part of its product-led European transformation strategy. Under this strategy, the RS brand is developed for performance purists, while the more accessible ST – Sport Technologies – brand appeals to a broader range of enthusiasts.

Ford’s Special Vehicle Engineering (SVE) department is entrusted with taking this performance strategy forward. It is led by the highly experienced Jost Capito, who joined Ford in October 2001 and was previously Chief Operating Officer at Swiss-based Formula 1 team, Sauber Petronas.

Ford Focus’ British sales success is well documented: since launch in 1998, sales have increased year on year; Focus has been the UK’s best-selling car every month for over two years and the world’s best-selling car since 2001. UK sales are up again in 2002 with 85,282 sales year-to-date, a 19.2 per cent increase over 2001. Total UK sales since launch are over 450,000.

In 2002, Ford Focus has also been recognised by the TüV organisation as the German car industry leader in reliability for cars between one and three years old.

The Ford Focus WRC, which inspired the Ford Focus RS, boasts an equally impressive performance and dependability record having won the last three consecutive world rallies, including the toughest of them all – the Safari Rally in Kenya.