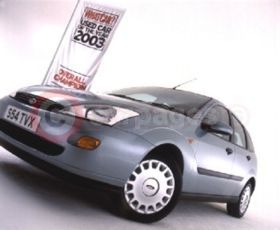 The Ford Focus is the best used car you can buy – that’s the verdict of industry experts at What Car? magazine.

The Focus, which is also Britain’s best-selling new car, scooped overall victory in the magazine’s annual Used Car of the Year awards primarily because it is outstanding value for money. A four-year-old 1.6 Zetec 5dr example at £5245 is less than less than half the price of a new one, but is every bit as talented.

In their conclusion, the judges said, ‘Pound for pound, this is the best car on sale in Britain.’

What Car? editor Rob Aherne said, ‘Think of everything you want in a used car and the Focus satisfies. Whether you’re looking for a keen drive, a family car or excellent reliability, you’ll find them all here – at a fantastic price.

‘The previous owner will have suffered the worst effects of depreciation, leaving you with little to worry about.’

The Focus was one of Ford’s two winners in the 10 awards classes. The Mondeo also picked up the award for the Best Used Family Car for the second year running, while Ford’s sister company, Jaguar, picked up the Luxury and Compact Executive class awards with the XJ8 and X-type respectively.

Toyota was another double winner, the Yaris picking up the Best Supermini title and the RAV4 winning the 4x4 award.

The other awards went to five different manufacturers. BMW’s 5-series picked up the Executive Car award, the Zafira went away with the MPV award for Vauxhall, and the Estate Car award went to Volvo’s V70. Finally, Subaru’s Impreza was voted Best Used Sports Car, while the Honda Civic Type R scooped the Hot Hatch crown.