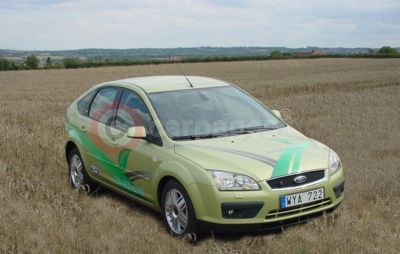 As petrol prices edge towards £1 a litre, the first Ford Focus Flexi-Fuel Vehicle in Britain is being tested by fleets taking delivery of the car next year.

The Ford Focus Flexi-Fuel Vehicle (FFV) arrived in Somerset with harvest underway. Somerset-grown wheat will be used to produce the bioethanol powering 40 Ford Focus FFVs coming to the county around March 2006.

Ford - the first major manufacturer to market a bioethanol-powered car in Britain - is sole vehicle provider to the project. It is supplying the bioethanol version of the all-new Focus, on sale this year, to the Somerset partners. They will be able to refuel at five new refueling points convenient to where the four fleets are based.

Ford is hoping the Somerset pilot will stimulate wider interest in the FFV and bioethanol. Already other rural economies have expressed an interest in setting up a bioethanol infrastructure - using local crops such as sugar beet to produce the ethanol.

Paul Thomas, Ford of Britain managing director said: "As number one in the car and commercial vehicle markets, Ford is expected to lead in the alternative fuel market also. Our customers should not be making any compromise for green motoring. With the Flexi-Fuel Ford Focus we are offering the performance and handling of the UK's favourite car with the option of filling up with bioethanol as the fuel becomes more available. We believe this will happen as more and more vehicle fleets - and eventually private buyers - come to see the benefits of this renewable fuel."

In Sweden, where 80 per cent of Focus models sold are FFVs, bioethanol costs more than 40 per cent less than petrol. The Somerset project draws on the Swedes' experience of establishing regional bioethanol distribution networks and the introduction of flex fuel cars.

In Somerset, Wessex Grain is planning a new bioethanol production plant next to an existing grain storage site in Henstridge. The facility will be able to convert 340,000 tonnes of wheat into 131,000,000 litres of ethanol a year at full capacity from 2007. In the meantime bioethanol powering the Focus FFVs arriving next year will be supplied by Wessex Grain from crops grown locally and processed elsewhere.

The 1.8-litre Focus FFV offers an overall 70 per cent reduction in carbon dioxide emissions compared to the same petrol-only model. This is achieved by factoring in the CO2 absorbed by the crop when grown prior to harvest for bioethanol production. The car can run on either E85 bioethanol (blend of 85 per cent ethanol/15 per cent petrol) or petrol in the same fuel tank in any mix.