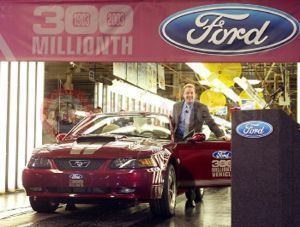 Ford Motor Company added another milestone to its Centennial year as it celebrated production of its 300 millionth vehicle this week.

In a ceremony at the Dearborn Assembly Plant in Michigan, employees and guests cheered as he drove the 300 millionth vehicle – a crimson red 2004 Ford Mustang GT convertible – off the line.

"In the 20th century, Ford Motor Company put the world on wheels with the Model T and the moving assembly line," said Bill Ford, Ford chairman and CEO. "In the 21st century, we are building on that heritage with exciting new products and innovative technology that will lead us into our next 100 years.

"When the company built its one millionth car, my great-grandfather Henry Ford said: "A million of anything was a great many," Bill Ford said. "He would be very proud that his company has produced 300 million vehicles.

"We're celebrating the past, but we're building for the future," he added. "In the next five years we'll introduce more than 200 new products around the world."

Ford also credited the extended family of Ford employees around the world and its global network of dealers and suppliers for their contributions to the 300 million milestone.

Ford's best sellers over the years have included the famous Model T, with more than 15 million built between 1908 and 1927. The Ford F-Series pick-up truck is the company's top vehicle nameplate in the world with 29 million produced.

Ford Motor Company is the world's second-largest automaker with approximately 335,000 employees and operations in more than 200 markets on six continents. It has more than 100 plants in 25 countries. Its automotive brands include Aston Martin, Ford, Jaguar, Land Rover, Lincoln, Mazda, Mercury and Volvo, and automotive-related services include Ford Credit and Hertz.