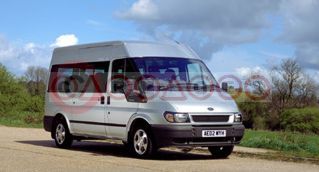 Ford Transit Minibuses stood as a testament to seat belt safety at a Society of Motor Manufacturers and Traders (SMMT) event today, to mark the 20th anniversary of mandatory seat belt use for drivers and front seat passengers.

"Safety leadership has been the hallmark of the Ford Transit Minibus range for many years and that heritage continues with our latest additions to the Transit family, Transit and Tourneo Connect," said Steve Parker, director of commercial vehicles, Ford of Britain.

Ford was the first manufacturer to introduce three-point lap and diagonal seat belts on every seat in all of its minibuses and Transits. Ford was also the first to test seat belts to passenger car levels, way ahead of any legislative requirements.

"At Ford, safety does not just mean seat belts. As well as being one of the few commercial vehicle manufacturers to have standardised airbags, Ford Transit safely proved its dependability in the industry manoeuvarbility 'Elk Test', a standard that not all manufacturers can claim," added Steve.

From a family of five to a 17-strong rugby team with reserves, the Transit family has six vehicles designed to transport people comfortably and safely in five-, eight-, 12, 15- and 17-seats. Ford leads the minibus market and in 2002 sold 1817 Transit Minibuses.

Every Ford Transit Minibus has fitted as standard: Ford has also been working with the charity Belt Up School Kids (BUSK). The reason school children have to be belted up in the school minibus is due solely to the efforts of Pat Harris, founder of BUSK. Pat led a campaign to introduce laws and to change the way people think about minibus and coach safety.
Published : 01/02/03 Author : Melanie Carter