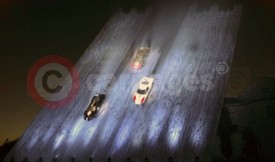 11 July, 2003 – A spectacular 40 metre high work of art depicting one of the proudest moments in Ford’s motorsport history, is wowing the crowds at the Goodwood Festival of Speed this weekend.

The central display outside Goodwood House is always one of the highlights of the festival and this massive sculpture, representing Ford’s 1-2-3 GT40 win at Le Mans in 1966, is the tallest structure ever seen in front of the 300-year-old West Sussex stately home.

It has been created by the charismatic designer Gerry Judah, whose team took over a year to design and build the project.

The crystalline structure is made of polycarbonate, a tough plastic similar to roofing material, backed by a steel support. Three replica GT40s are fixed to the front in their winning formation, while a fine mist of water plays around the cars, to simulate the rain-soaked Le Mans track of the 1966 race.

"The sculpture captures an historic moment, freezing the cars in time as they cross the winning line in the pouring rain," said Gerry.

The three, privately owned replica GT40 cars are hung upside down, 15 to 20 metres off the ground. Lighting effects simulate the cars’ head and taillights, making the structure look particularly dramatic at night.

The foundations for the 38 metre wide artwork are six to eight metres deep. Gerry even engaged wind specialists who evaluated the weather and the movement of the wind to see how it would affect the structure. He needed to make sure that the structure had enough small air holes to allow the wind to blow through, so there is no danger of it toppling over.

"This is the most powerful and dramatic centrepiece I have created, I felt I was not just dealing with an idea but dealing with a unique moment in the history of motorsport. I wanted to create something iconic, something that really stamped its mark on the festival. The sheer scale is imposing by itself and the power and drama are enhanced by the use of moving water and by the lighting effects," said Gerry.

Gerry’s firm, London-based Judah Design, has also produced a fascinating infield display celebrating Ford’s centenary. Dubbed the ‘smallest motor show in the world’ over 150 plinths are topped by nearly 200 scale models of Ford cars through the ages, from Henry Ford’s original Quadricycle to the latest Streetka.

There are three different sized plinths, and many different sizes of model cars - some rare collectors items. The cars are lit from above in a darkened space surrounded by a display wall with plasma screens of major historical events from the last century.