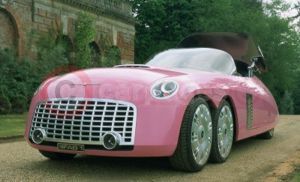 Ford is supporting the production of ‘THUNDERBIRDS’, a big budget, live-action family movie based on the cult ‘Thunderbirds’ TV show and due for global release through Universal Pictures from Summer 2004.

Ford’s primary involvement with the movie has been to assist in the development of Lady Penelope Creighton-Ward’s FAB1 limousine – a stunning pink, 27-foot, six-wheel/bubble canopy vehicle, which can transform between car jet plane and hydrofoil and features clear Ford Thunderbird design cues.

THUNDERBIRDS producer, Tim Bevan, commented, "FAB 1 provides the first glimpse into the new-look THUNDERBIRDS movie. We hope to realize fully the genius of the original series and bring it to life for an entirely new generation worldwide."

Ford Design Europe led the design of the FAB1 vehicle and also delivered a number of ‘virtual’ concept vehicles for the movie. The Ford EX concept is also prominently featured in one of the movie’s chase sequences and other Ford vehicles, including the new Focus C-MAX, will feature in appropriate scenes.

"For our design team, it was essential that the new FAB 1 captured the essence of the original – its size, power and sheer presence," explained Chris Bird, Director of Design for Ford of Europe. "The people that have worked on this car were already fans, so we hope the end result will please ‘THUNDERBIRDS’ purists as well as the new generations of movie goers who will see it in action on-screen."

Set in 2010, the film is directed by Jonathan Frakes, famous for his role as William Riker in ‘Star Trek: The Next Generation’ TV series, and as the Director of ‘Star Trek: First Contact’ and ‘Clockstoppers’ feature films. It is produced by Working Title, Europe’s most successful production company, which numbers amongst its hits ‘Bridget Jones’s Diary’, ‘Four Weddings and a Funeral’ and the current box office hit ‘Love Actually’.