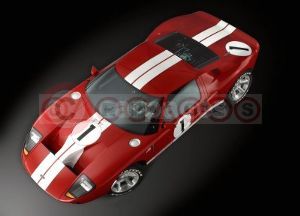 The modern reincarnation of Ford's Le Mans winning GT40 will be available in Europe in strictly limited numbers.

Geneva - The Ford GT, the production version of the stunning GT40 Concept Car, is coming to Europe. Up to 80 of these exclusive, high performance supercars are expected to go to discerning European customers, starting later in 2004.

No price has yet been announced for the Ford GT but it has been indicated that it will go on sale in the US for under $150,000. The Ford GT programme for Europe will be managed by ‘Ford Team RS’, a new organization being formed within Ford of Europe’s Product Development group. Ford Team RS

Ford Team RS will combine the resources of Ford Special Vehicle Engineering (SVE) and Ford Racing. The heads of those existing organisations, Jost Capito and Martin Whitaker, retain their respective responsibilities in the new set up. However, they will come together under ‘Ford Team RS’ to share engineering expertise and cascade this through Ford’s World Rally Car and Formula One programmes and into future road-going Ford performance cars.

Jost Capito will remain responsible for developing and engineering road and competition cars and services that epitomise the three Ford performance brands – ST, RS and Cosworth – while Martin Whitaker will continue to direct Ford's European motorsport activities in Rallying, Formula One and circuit racing.

“The formation of ‘Ford Team RS’ confirms our intent to deliver exciting performance vehicles to Ford’s European customers,” said Derrick Kuzak, Vice President of Product Development for Ford of Europe. “Combining the expertise of these two specialist teams will have a direct benefit both ways. The Ford Team RS vehicle development engineers will share knowledge and testing facilities with the WRC and Formula One teams, while their experiences and technological developments in the heat of competition will help us to develop truly exhilarating road cars for the future.”

The new organization will benefit from an enhanced engineering resource that eliminates the inevitable duplication that existed between the two separate groups. Combined with the ability to pursue more closely aligned strategies between the motorsport and production car sides of the business, this will enable Ford Team RS to pursue more aggressively opportunities in both specialist production cars and competition.

The Ford GT's Route To Europe

Ford Team RS will have special responsibility for the European introduction of Ford GT. The new organisation will work with the US-based Ford GT development team to provide the facilities and expertise for bringing up to 80 of these supercars to European buyers.

Precise details of the European Ford GT specification, price, market availability, distribution and after-sales service provision will be released closer to launch of the vehicle in 2004.

In the interim, European customers who want to register their interest in purchasing one of the limited number of Ford GTs can do so via a dedicated website: www.FordTeamRS.com

European customers for the Ford GT will need to be a little patient because the car does not go into production in the US until Spring 2004. Deliveries in Europe will not start before fourth quarter 2004. The total production run for the Ford GT is targeted not to exceed 4,500 cars.

As a tribute to the Ford GT40 taking the first three places at Le Mans in 1966, three of the new Ford GT vehicles are being produced in 2003 to help commemorate Ford's centennial celebrations.

Rebirth Of A Legend

The Ford GT was unveiled at the 2002 North American International Auto Show as the GT40 concept vehicle. The production model will feature a modular aluminium body construction and it is powered by a supercharged 5.4 litre V8 producing more than 500 horsepower and 500 lb ft of torque.

These figures match or exceed those of the most powerful racing cars that inspired the Ford GT production car. The original GT40 racing car could top 200mph on the Mulsanne straight at Le Mans. In the Ford GT this power reaches the road through a six-speed manual transmission.

Racing historians and enthusiasts are familiar with the legend behind the Ford GT, which was later nicknamed the GT40 in reference to the vehicle's overall height in inches. The original Ford GT programme was conceived by Henry Ford II after his attempt to purchase Ferrari fell through. The Ford GT was presented to the press for the first time in 1964 and it was at Le Mans in the June of 1964 that people began referring to the sleek racer as the GT40. Throughout its racing career, the original Ford GT Mk I and the Mk II, III and IV versions carried only the nomenclature "Ford GT" or just "Ford" on their body sides and steering wheel hub.

“The new Ford GT production car stays true to the spirit of the original racing car while providing an evocative and thoroughly up to date expression of the modern supercar,” said Kuzak. “We are delighted that through our new Ford Team RS organisation, a small but discerning group of European car enthusiasts will have access to the unique experience of owning a legend reborn”.