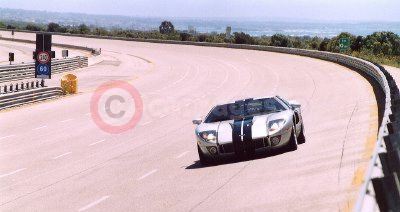 Just as the Ford GT40 was the first race car to break the 200mph barrier at LeMans, the new 2005 Ford GT has become the first production road car wearing the Ford badge to achieve top speed in excess of 200mph. During engineering testing for high-speed stability and powertrain durability at Italy's famed Nardo test facility, the Ford GT reached a certified top speed of 205mph. In 1966, a GT40 reached a trap speed of 201mph on the Mulsanne Straight during the 24 Hours of LeMans endurance race, and now the new Ford GT continues that legend by again breaking new ground.

"The engineering team has once again outdone themselves," said John Coletti, director of Ford SVT programs. "This is a major accomplishment and puts the Ford GT among the ranks of the greatest sports cars in history."

Aerodynamics and high-speed stability has been a major focus of the engineering program from the very beginning, when the team first tested an original GT40 in the wind tunnel.

The GT40 exhibited major lift at high speeds, and the team determined that the Ford GT would also have the same issue if care was not taken to attend to the problem. In order to not disturb the well-executed exterior design, the engineering team limited aerodynamic changes primarily to the underside of the vehicle. As a result, a subtle rear spoiler extension, front and side splitters and venturi tunnels wrapped under the rear clip are the only visible changes.

"Driving the Ford GT at speeds above 200mph was remarkably uneventful, which is a very positive outcome," said Mark McGowan, Ford GT vehicle dynamics supervisor and driver during the Nardo testing. "I was able to drive the around the 13km track with my foot to the floor with complete confidence in the stability and control of the car at 200mph plus. My only limitation was the amount of fuel in the tank!"

The 550 hp 5.4-liter DOHC supercharged V-8 engine was also put to the test during the Nardo trip. The engineering team required a 500-mile test at or near maximum velocity speeds to prove-out the strength and durability of the powertrain. Not only did the engine exhibit strong acceleration all the way to the 205mph top speed, but it passed the durability test without any significant problems.

"The Ford GT is performing at levels of super exotic sports cars that cost 3 and 4 times as much money, and it still meets all the engineering and quality requirements of any Ford vehicle program," stated Coletti. "That is no small feat, but a showcase of the passion and talent that resides within the Company."

The 2005 Ford GT will be built at Ford's Wixom (Mich.) Assembly Plant. Production will begin this summer.

Ford GT Images may not be UK specification cars. Colours and exterior and/or interior elements may differ from actual models.