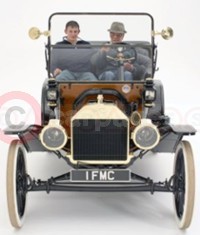 Sid Curtis, known as ‘Centenarian Sid’ by his family, a retired employee from Ford’s Dagenham Plant in Essex, also celebrates his 100th birthday this month, surrounded by his family, 11 of whom also work for Ford.

Born in Hoxton, East London, one of 13 children, Sid started work as a carpenter at Ford’s Dagenham plant in 1936, working on cars like the Ford Model Y and the early Ford Anglias. During the war years he worked in a munitions factory in Dagenham, before retiring from Ford in 1968.

Sid said: "You know I’ve worked for Ford all these years but I never learned to drive and never owned a car. Cars have changed a lot since I started working at Ford. I was a carpenter and used to install all the dashboards and floors in the early models, lots of things were done by hand, it’s all much faster now and cars are not as simple."

Bill Ford, Chairman and CEO of Ford Motor Company, said: "Our 100th anniversary gives us an opportunity to reflect on and celebrate our heritage. It also challenges us to look ahead and create a vision for the next 100 years.

"My great grandfather Henry Ford put the world on wheels by mass-producing simple, reliable automobiles that the average family could afford. This remarkable legacy reaches and inspires us and here at the start of the 21st century our goal is to have an even greater impact on people’s lives in the next 100 years."

Henry Ford and 11 investors signed the articles of incorporation to establish the Ford Motor Company on 16 June, 1903, now 100 years on, Ford is celebrating this historic milestone.

While the major centennial celebration will be centred on Ford World Headquarters in Dearborn, Michigan today, the largest centennial-themed event outside of the U.S will be in Britain, at the Goodwood Festival of Speed to be held on 11-13 July in Sussex with Ford as the featured sponsor.

Ford customers, employees and enthusiasts all have a chance to contribute to Ford's history through the Ford global centennial website accessed via www.ford.com . The "Your Story" section of the website allows site visitors to share their Ford stories, everything from their first Ford product to how the company has impacted their lives.