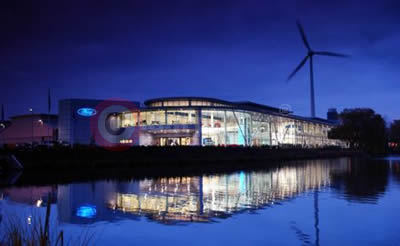 Ford Motor Company is the most responsible corporate citizen among automotive firms in Britain, according to an independent poll. Ford comes top of its sector in Business in the Community's 2005 "Companies that Count" survey and 48th overall. This is a rise of five places compared with last year's findings.

Business in the Community represents 750 companies including Ford which are working to improve the way that business affects society. In the third annual "Companies that Count" survey Ford was awarded 86 per cent overall across five sections: strategy, integrating responsible practice into all parts of the operation, management practice and company performance.

In the leading sections the majority of Ford's answers scored 100 per cent. Companies were interrogated across all five sections with 70 questions and requests for evidence. The ranking process was then checked by independent verifiers.

Andy Taylor, Ford's European corporate citizenship director, said: "Ford is very aware of the impact it has both as Britain's best selling car and commercial vehicle manufacturer and as a major employer with 12 locations in the UK. With this major presence comes an expectation that we do business as responsible and trusted citizens.

"Our success as a 'Company that Counts' in Britain confirms that Ford does act responsibly. Our Dagenham wind turbines and the great strides made on Ford vehicles' fuel consumption and emissions are good examples of a responsible corporate citizen at work."

Ford's Dagenham Diesel Centre (DDC) is the company's only wind-powered plant in the world and saves thousands of tonnes of power station emissions.

The turbines generate enough electricity to supply the equivalent of 2,000 homes. In the plant the highly acclaimed 2.7-litre V6 diesel engine for Jaguar S-TYPE and Land Rover Discovery is built using exclusively green energy. Even the site's electric pool car vehicles are recharged using power from the turbines.

Latest generation diesel engines such as the Dagenham-built 2.7-litre unit demonstrate how Ford's products benefit the whole community. Diesel engines are among the cleanest and most fuel efficient of all internal combustion engines, burning on average 30 per cent less fuel and producing 25 per cent less CO2 emissions than petrol vehicles.

As well as proving itself as a company that counts in the corporate responsibility stakes, Ford has once again been voted Britain's Most Trusted Car Brand by Reader's Digest. Around 2,250 UK subscribers to the world's most widely read magazine took part in this year's brand survey.

They judged Ford to be the most trustworthy car brand for the fifth year running - awarding the company a six per cent lead over its nearest rival. Readers chose their favourites on the basis of quality, value, image and understanding customers' needs.