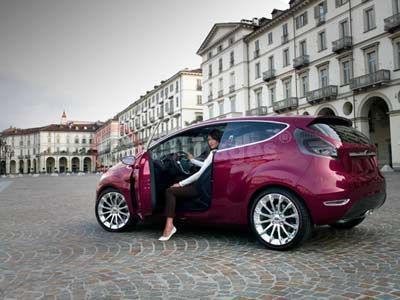 Ford designers have been chasing girls all around Europe: All because the fashion-conscious fräuleins, mademoiselles and senoritas hold the key to the look of the new Ford Fiesta.

The result of the research is the Ford Verve Concept which will be unveiled at the Frankfurt Motor Show next month. Verve is the first of three small concept cars shown around the world between now and next January as the replacement for the ever-popular Ford Fiesta takes shape.

Ford of Europe design chief Martin Smith, said: “A new look for the Fiesta meant that we had to look for expressive design, a strong, colourful personality and a look that is fashionable and striking.

“Our target group for research, therefore, had to be very design aware and fashion conscious – that means predominantly young women.”

In fact it was the young women in Italy who told the design team that they wanted something “sprinty”.

“That became something of a buzzword,” said Smith. “We would ask ourselves ‘is it sprinty enough yet?’”.

Reaction from younger males has also been positive, he added.

The Verve is the first small vehicle to follow Ford’s so-called ‘kinetic’ design philosophy, introduced by Smith when he arrived from automotive rival General Motors.

He said: “Kinetic design involves dynamic lines, bold graphics and full surfaces.” This has already been seen on larger Fords such as the Galaxy, S-Max and Mondeo.

It has also been carried over to the interior with a centre console display which resembles the layout of a mobile phone.

When will we see this car on the road? Joe Bakaj, vice president of product development said: “This is a concept at the moment and we will see two more before we sign off on the design of the next Fiesta.”

The new model is slated for sometime between 2008 and 2011 and will be a global vehicle on sale in Asia and North America as well as Europe.

The Verve is one of three major unveils for Ford at the Frankfurt Show, the others are the mid-term facelift for the Focus and the Kuga SUV concept.
Published : 23/08/07 Author : Melanie Carter