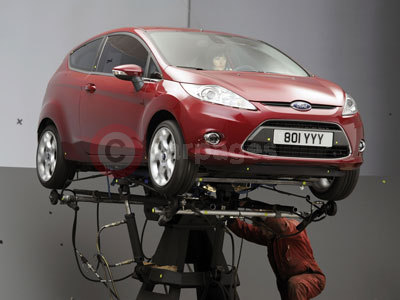 The innovative new advert will debut during the half-time break of the UEFA Champions League football final on May 27th to an estimated 30 million television audience across Europe. It was created by London-based agency Ogilvy and directed by Nick Lewin from the award-winning production company Partizan.

Five of Ford's key new models - the all-new Ford Fiesta, Ford Focus, Ford Mondeo, Ford Kuga and Ford S-MAX - star in the new advert, which sets out to visualise the key philosophy of the company's award-winning kinetic design form language used across the range: that the latest Ford cars look like they're moving even when standing still.

The story portrays an urban car chase with a twist. Although the storyline appears to show the cars in motion, the vehicles never left the confines of the film studio as the vast majority of the action was filmed with static vehicles mounted on bespoke electro-hydraulic turntables.

Shooting took place over a week at Pinewood's famous 007 Stage, the largest of its kind in Europe and the same studio used for the stunning collapsing Venetian building scene in the Casino Royale James Bond film.

The shoot was broken down into three stages; the filming, the intensive post-production work and then the associated generation of additional elements for use with on-line media.

Matching the studio film material to an urban environment was undertaken by The Mill Studios, the renowned London post-production company awarded an Oscar for its work on Ridley Scott's film Gladiator in 2000.

Maureen Graham, Ford of Europe's Director of Marketing Communications said: "Not only is this commercial a huge technical achievement for everyone involved, but it also marks a shift in Ford's advertising strategy. We're not moving away from single model adverts; additionally we're planning campaigns which focus on key attributes of our brand as a whole. In this campaign, we want to emphasise that driving a new Ford car is now a more emotional experience thanks to the impact of 'kinetic design' which has become a recognised styling theme across our portfolio of new models."

"Ford kinetic design visualises the driving characteristics of our cars. This advert articulates that by making the cars look like they're moving even when they're not. We're very pleased with the concept and with the end result," she added.

The new TV advert will make its television debut to an estimated 30 million European audience during the half-time break of the UEFA Champions League final on 27th May 2009. Supporting the new advert is an online campaign developed by Ford's digital agency, Wunderman.