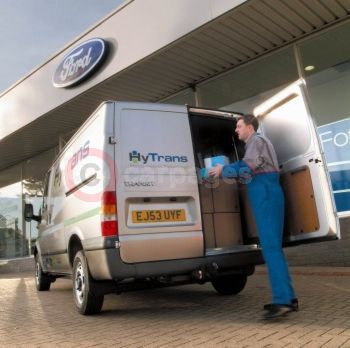 Urban fuel consumption improved by more than 21 per cent

Fleet operators and other prospective buyers of the diesel/electric Ford Transit HyTrans will be testing the vehicle following this week's public debut. HyTrans is the first medium commercial vehicle in Europe featuring stop/start technology for greater fuel economy and reduced emissions.

Now the vehicle - which offers fuel savings of 21.3 per cent when used on the demanding urban delivery cycle - will be appraised by fleets and appear at events through 2005.

Commercial vehicle engineers at Ford's Dunton Technical Centre in Essex had worked with partners Ricardo, Valeo and Gates on a 12-month government-funded project to produce the HyTrans prototype.

HyTrans is based on the production 2.0-litre diesel Ford Transit and is equipped with a belt-driven integrated starter generator (B-ISG). This automatic engine stop/start system operates when the Transit is stationary. The engine switches off once the engine is idling and the gear lever is in neutral. It restarts as soon as the driver depresses the clutch to select a gear to move off. The engine is running again within 400 milliseconds - well before gear selection is completed.

The HyTrans concept is aimed at the rapidly expanding urban delivery market, which has primarily grown as a result of home shopping on the internet.

Roger Putnam, Ford of Britain chairman, said: "As a member of the Low Carbon Vehicle Partnership, Ford is working on vehicles needing less carbon fuel. The Ford Transit HyTrans concept is an excellent example of future technology answering a current business need. You do not have to spend long on the high streets and side roads of Britain's towns and cities to see the huge number of vans delivering goods to householders and businesses. We believe HyTrans is the way forward."

HyTrans will next appear at an exhibition of future automotive technology called Green by Design at the Heritage Motor Centre in Gaydon, Warwickshire, from 10 February, 2005.