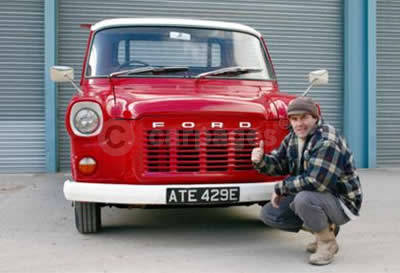 Ford's search for the oldest Transit in everyday use in the vehicle's 40th anniversary year has led the company to a builder with a flat bed Transit of almost the same age. General building contractor Neil Cottam, of Preston, Lancashire, runs a 1966 25 cwt twin wheel Transit, which only has one previous owner.

Neil said: "It was the most original Transit I'd seen, it still has its Perkins 4108 engine. It may not be a museum exhibit but it's fully driveable. It's been on the road for 39 years now and all of that with just 50 horsepower."

Carefully preserved MOT certificates verify that Neil's Transit has covered just 46,000 miles in its lifetime. It takes pride of place on his drive next to his daily workhorse, a thirty years old Transit, registered in 1971.

Gary Whittam, commercial vehicles director, Ford of Britain, said: "It's been fascinating finding out about people like Neil who nurture their Ford Transits. We are very proud that Transit has helped to shape today's Britain, whether that's on a building site or delivering meals on wheels. It's great to hear that the people whose lives are touched by Transit are as proud as we are."