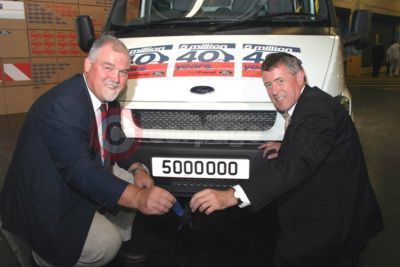 The five-millionth Ford Transit rolled off the Southampton assembly line today. That’s enough vans to cover the entire length of the UK 15 times bumper to bumper.

In a ceremony at the plant, Southampton MP, John Denham, employees and guests applauded as Robin Trowbridge, team leader on the production line, with 32 years service, drove the five-millionth Transit - a white minibus- off the line.

Mike Gatting OBE, was there to receive the keys. An important part of the charity's work is supplying minibuses to special needs organisations across the UK. Last year the Taverners put a Ford minibus on the road for every week of the year.

Paul Thomas, managing director, Ford of Britain, said at the celebration: "All of us at Ford are extremely proud of the Transit's unprecedented success both here and around the world. Transit is a very important part of our portfolio - all Ford employees are to be congratulated for their hard work and dedication in producing a world class vehicle."

The Ford Transit is a British product through and through: it's assembled in Southampton, its engines are built in Dagenham, Essex and the transmissions are built in Halewood, Merseyside.

Transit has entered colloquial English language as a synonym for a medium commercial vehicle - which is no surprise since it has been Britain's best-selling van its entire lifetime.

At the Southampton plant, one of Ford’s most productive facilities in Europe, 1,441 employees currently build 329 Transits each day, in two shifts. The sequence and the quantity of the various versions are completely flexible, ensuring a fast response to changes in customer demand.

Last year production reached a record level of 70,674 units, and 50 per cent of all vehicles produced were exported to more than 50 countries around the world.