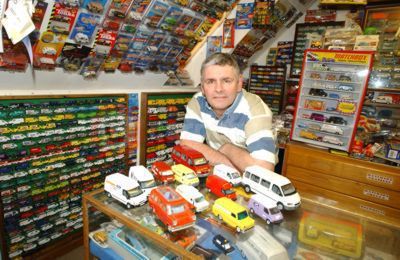 Vans measuring anything from three inches to three metres will appear on Ford's stand (630, Hall 9) at this year's Commercial Vehicle Show at the NEC, Birmingham.

Peter Lee, renowned Ford Transit model and memorabilia collector, will be talking to the collectors who want to bring their own models to the stand and to the many visitors who share his passion for the Ford Transit.

A selection of Peter's 10,000-model collection will be displayed including his rarest piece, the millionth Transit van made by Dinky toys in 1976 to coincide with the millionth Transit coming off the line at the Southampton plant. There were just 50 models made and only five have been seen in the last 29 years.

Peter worked at the original home of the Ford Transit, Langley, Berkshire which is where he developed his passion for the panel van. He began collecting model vans in the 1970s and 35 years on, he still can't resist the hunt for a new or rare model. He and his wife Debbie also help to run the National Street Van Association.

Gary Whittam, commercial vehicles director, Ford of Britain, said: "It's been fascinating finding out about Peter's collection and passion for all things Transit. We are very proud that Transit has helped to shape today's Britain, whether that's delivering goods around the country or being transformed into street vans. It's great to hear that the people whose lives are touched by Transit are as proud as we are."