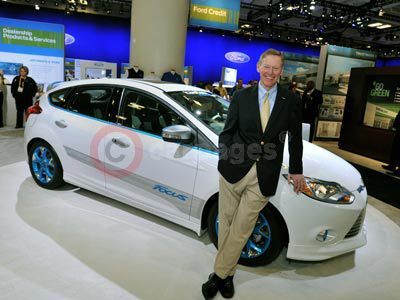 Ford President and CEO Alan Mulally With The Ford Focus

Ford customers in Britain will be among the first to benefit from the global launch of SYNC when it makes its European debut on the Ford Focus in 2012, bringing the company's award-winning voice-control and connectivity technology to a new audience.

Ford president and CEO Alan Mulally will deliver the news to the 2011 CeBIT technology show in Hannover, Germany, tomorrow.

SYNC with the MyFord Touch interface is a rich, interactive experience that makes vehicle functions, settings and information easily accessible to the driver through voice control, through steering wheel controls or a simple tap of the centre stack touch screen.

When SYNC makes its European debut in the all-new Ford Focus next year, drivers will have access to one of the most advanced voice control and device connect technologies on the market with unrivalled connectivity and integration options for vehicle drivers and occupants.

Ford anticipates that nearly 2 million new vehicles in Europe will feature the system by 2015, making a major contribution to the use of in-car technology alongside customer convenience.

Powered by the Microsoft Windows Embedded Automotive platform, SYNC has been designed to offer a smarter, simpler and safer means for drivers to operate mobile devices inside their cars and to stay in touch with the outside world while on the move.

Key to SYNC is the voice command and control system. Developed in partnership with Nuance, the world's leading provider of voice technology, the system is able to cope with the unique challenge provided by Europe in terms of the number of languages spoken and the variance of accents and vocabulary within those languages.

SYNC can recognize 10,000 commands in any one of 19 languages, giving drivers across Europe and around the world the power to control the majority of the vehicle's functions using their voice.

SYNC will be able to understand U.S., U.K. and Australian English; European and Canadian French; European and U.S. Spanish; and European and Brazilian Portuguese. Elsewhere in Europe, German, Italian, Dutch, Russian and Turkish are all understood. Beyond Europe, languages such as Arabic, Korean and Japanese are also compatible.

Working with Nuance, Ford engineers have developed SYNC to be highly responsive to spoken commands, eliminating the need for multiple layers of command entry in many cases. For example, SYNC leverages Nuance's one-shot destination entry capabilities, allowing the driver to state aloud a full destination address without needing to prompt individually for city, postcode and street.

SYNC is able to connect to mobile phones via Bluetooth, offering a fully integrated hands-free, voice command and control that is safe and extremely convenient.

It offers far more than a basic level of phone integration however, being able to automatically transfer contact information and photos from the device phonebook to the vehicle.

When connected to a compatible phone, SYNC can retrieve text messages and read them aloud, allowing a response to be sent using voice activation from a predetermined list of responses while on the move.

Media can be acquired using built-in USB ports for devices such as MP3 players, an SD-Card port and RCA inputs for audio and video.

SYNC can also turn the car into a mobile WiFi hot spot. Offering a connection using a portable USB modem or Bluetooth-tethered compatible smartphone, SYNC can turn an incoming single point of internet connectivity into a WiFi broadcast inside the car for up to five passengers to connect their internet-powered devices.

More than 3 million Ford vehicles in the US have been equipped with SYNC since late 2007.