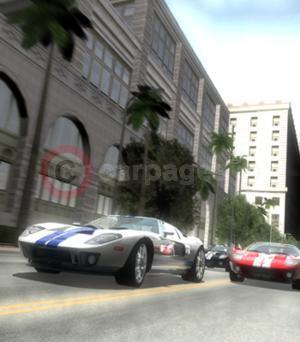 With over a million units sold, the Ford gaming brand has become synonymous with heritage, style and performance, and the latest title in the series Ford Street Racing is no exception. Taking the power of Ford beyond the racetrack and onto the sun-bleached streets of LA, Ford Street Racing delivers a unique fast-and-furious team racing experience.

Ford Street Racing has the unique ‘team’ feature, putting you in control of your own Ford racing team. Whilst racing through the dangerous streets of LA, switch between your three cars and issue commands to your team-mates to gain both a tactical and positional advantage. Block, draft and challenge your opponents as you get behind the wheel of any of the 18 officially licensed high performance Ford vehicles - from the classic 1970 Mk 1 Capri RS2600 to the recently announced 2007 Shelby GT 500.

Ford Racing never looked or felt this good; now with exceptionally detailed LA environments, beautifully realistic cars, a car damage system and drastically improved handling, this is the slick and sexy race extravaganza gamers have been waiting for.

“With all these great new game features and especially the unique ‘team’ feature, Ford Street Racing takes our massively successful Ford series in a new and exciting direction that is sure to continue the great sales trend enjoyed by the franchise up to know,” commented James Spice, General Manager of Xplosiv.