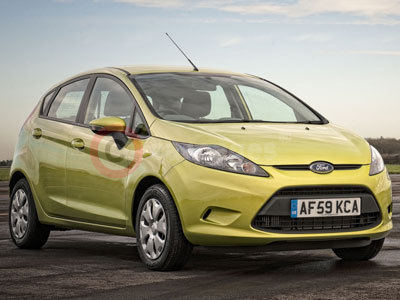 Ford's top selling vehicle range secured almost 17 per cent of the UK's total 2009 market for the blue oval, making one in six new vehicles a Ford.

Ford sold 316,369 cars in the UK last year during a challenging trading period which saw the Government introduce its vehicle scrappage scheme mid year. Ford took over 35,200 scrappage orders in 2009, helping to maintain car registrations to within two per cent of its 2008 total.

In early 2009 the Ford Fiesta took over the top UK sales position from the Ford Focus and the pair retained first and second in the sales charts through to the end of the year. The economical Ford Fiesta led Ford sales of cars with emissions under 120g CO2/km, which doubled for the blue oval during 2009 versus the prior year. Ford also offers three sub 100g CO2 vehicles in its Ford Focus, Ford Fiesta and Fiesta Van ECOnetic models.

Ford Transit, launched in 1965, has led the commercial vehicle sector ever since. The iconic Ford Transit helped grow Ford's 2009 CV registrations to 24.4 per cent - up from 23.6 per cent the prior year.

In a particularly challenging 2009 CV market, Ford light commercials raised their share of the segment by 4.5 percentage points to 26.3 per cent, compared with 2008.

Nigel Sharp, Ford Britain managing director, said: "Ford's strong 2009 sales performance underlined once again the market appeal of the company's best ever product line up. 2010 is set to be another year of tough trading but Ford will continue to benefit from a flow of new models, including S-MAX, Galaxy and C-MAX, and the unrivalled strength of its dealer network.

"Ford Fiesta continued collecting awards through the year after kicking off 2008 as Car of the Year according to What Car. Autotrader named the Ford Focus their Car of the Decade."