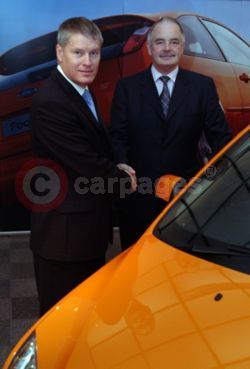 Ford once again proved to be Britain's most popular automotive brand by motoring into the New Year over 66,000 sales ahead of its nearest competitor.

Ford cars have been the favourite choice for buyers in Britain for 29 successive years. The iconic Ford Transit, which celebrated its 40th anniversary last year, enabled the Blue Oval to secure four decades of consecutive commercial vehicle market leadership.

Ford's commercial vehicle range topped 88,800 sales, accounting for 23 per cent of registrations in this sector. The second-placed commercial vehicle manufacturer was more than 36,000 units behind. The success of Ford Transit and Transit Connect helped the Blue Oval sell around one in three medium-sized commercials on the road.

This follows a dominant sales performance in December when Ford led the pack with a 14.8 per cent share of the car market - beating December 2004 by almost 2,500 units. Ford commercials were 22.5 per cent of their market in December 2005.

"The ongoing success of the Ford Focus as the UK's top selling car is especially pleasing," said Paul Thomas, Ford of Britain managing director. "It is an accolade the model has held every year since the original Ford Focus went on sale in 1998."

Other 2005 sales successes for Ford of Britain according to figures from the Society of Motor Manufacturers and Traders released today include:

Almost 30 years of car market leadership and a staggering 40 years of success for the Ford Transit have put us in prime position," said Paul. "Ford has made a flying start to an exciting and busy year which will see us launch five new products. The 2006 Ford Fiesta and Fusion now on sale will help this retail favourite celebrate 30 years of supermini success since the first Fiesta model arrived on UK roads in 1976."

Nigel Sharp, Ford of Britain's incoming sales director, said: "The 2006 outlook for Ford is good although the market will remain very competitive - so it's a great time for customers to buy. The combination of our future products and the pace already set by sure winners such as Ford Focus ST mean I'm looking forward to the challenge."