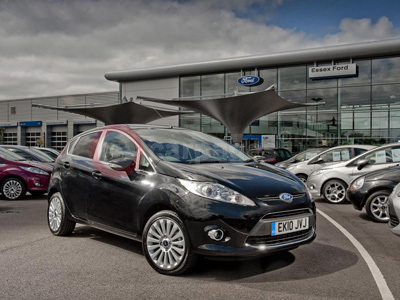 Ford's clear UK vehicle market leadership was confirmed in July 2010 as its new pricing strategy came into effect across its passenger car range.

According to official figures released today by the Society of Motor Manufacturers and Traders, Ford was the overall car sales leader in July 2010, with 18,442 registrations, and for the year to date (176,792). Ford also boosted its lead in retail car sales in July with a share of 12.1 per cent, up 1.0 percentage points compared with July 2009.

As well as being the favourite of retail customers, Ford Fiesta was again the overall UK best seller in July, and for the year to date. Ford Focus maintained its second place in the sales chart for registrations to the end of July.

Ford's latest pricing strategy for passenger cars is set to strengthen the brand's appeal for retail customers. Ford has reduced official recommended list prices on its medium and small cars from August, following similar action on Ford's large cars in April. Ahead of these price changes, dealers have been offering special promotions which mirror these lower prices.

Nigel Sharp, managing director Ford of Britain, said: "Ford's clearer pricing policy, started early in 2010, becomes permanent this month. This will confirm to our customers that Ford provides the best value, that they will get high-quality and technically advanced features as well as a competitive price."