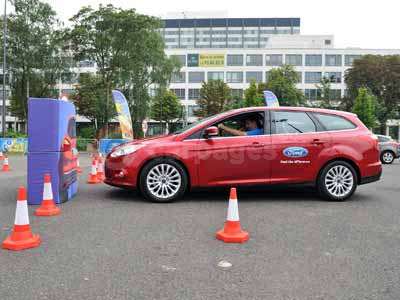 A survey of British motorists by Ford has shown that the majority of drivers believe that they could not easily pass the driving test if they took it today and newly qualified drivers have the least belief that they could pass a second time.

Adrian Walsh, director of motoring safety partnership RoadSafe, said: "Women are generally much safer drivers than men; every piece of substantial research done on this subject reveals that. Fundamentally it's because they take fewer risks."

Adrian Walsh: "The driving test is primarily about skills, it’s not a measure of motoring attitudes. It’s the attitude this age group takes to risk which has a negative impact on road safety.

"Males aged 17 to 24 are high risk drivers, and so are involved in proportionately many more accidents.

"There is a need for people to learn again how to drive. Advanced driving lessons are an extremely good idea."

The survey showed that respondents ranked airbags as the technology which makes them feel safest (32 per cent), followed by Active City Stop (19 per cent) and voice control (11 per cent).

Ford's safety technology includes Active City Stop - which available on the new Ford Focus - will assist the driver at speeds of under 20mph. If the system senses that the car in front has stopped unexpectedly, the car will automatically apply the brakes.

Voice control, available on all Ford cars and standard on the Ford Focus Edge to Titanium X, allows the driver to control the radio station or music, climate control and phone calls without the use of their hands, meaning they can be kept on the wheel.

Ford's survey shows that drivers have an interest in future technologies such as the vehicle automatically dialling the emergency services in the case of an accident (a feature of the SYNC system available on Ford vehicles in Europe in 2012) or inflatable rear seats belts.