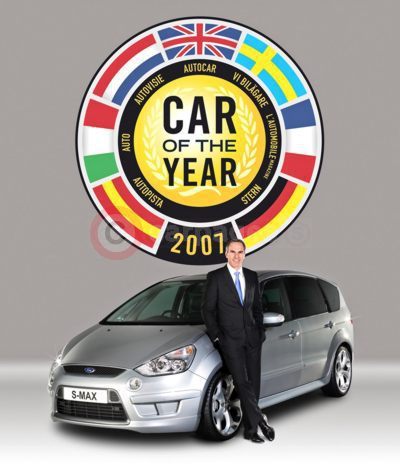 The all-new Ford S-MAX has been awarded the prestigious title of "Car of the Year 2007".

The Car of the Year is an international award, judged by a panel of 58 top motoring journalists from 22 European countries. Its objective is to acclaim the most outstanding new car to go on sale in the 12 months preceding the date of the title. It is organized by a group of seven leading European publications: Auto (Italy), Autocar (Great Britain), Autopista (Spain), Auto Visie (Holland), L'Automobile Magazine (France), Stern (Germany), and Vi Bilagare (Sweden).

The Ford S-MAX was declared the winner following a closely fought competition in which 41 contenders for the award were reduced to a shortlist of just eight - the Citroen C4 Picasso, Fiat Grande Punto,  Ford S-MAX, Honda Civic, Vauxhall Corsa, Peugeot 207, Skoda Roomster and Volvo C30.

"We are absolutely delighted that this all-new model in the Ford range has secured the ultimate accolade as Car of the Year, especially against such worthy competitors and in a year that has seen a record number of eligible contenders," said Roelant de Waard, Chairman and Managing Director, Ford of Britain.  "Since we launched S-MAX earlier this year, we have been amazed at the reaction to the car, both from the opinion forming media as well as our customers."

"This award confirms what we dared to believe - that Ford S-MAX is different, and creates a new vehicle segment in which elements of a sports car and a multi-activity vehicle combine together to deliver a dynamic and stylish family vehicle that you really want to own," he added.

Commenting on the award, Ray Hutton, the President of the Car of the Year jury said: "This was a very close contest with all eight of the finalists deserving a place on the shortlist.  It is clear from the voting that the jury is impressed by the concept of the Ford S-MAX: a spacious and versatile car that drives like a sports saloon. Its victory is well-deserved."

With UK sales of over 4,000 since its launch in June and with the order bank still growing, S-MAX is proving a huge hit with UK customers. Data from sales so far indicates that over 50 per cent of vehicles being sold are top specification, Titanium models and that a similar percentage are being sold to customers who are new to Ford.

"We are very excited about the reaction to our "kinetic design" form language," said Martin Smith, Ford of Europe's Executive Director of Design.  "The Car of the Year award for S-MAX proves we're on the right track with our invitation to customers to 'Feel the Difference' and our commitment to broaden the appeal of Ford's future European vehicles beyond the rational and into the emotional."

Ford and 'Car of the Year'

The 2007 award for Ford S-MAX marks Ford of Europe's fifth Car of the Year win, with the original Ford Focus last collecting the award in 1999.  The Ford Focus set new standards in its class, and won by one of the biggest margins in the award's 44-year history.  Ford also won the title in 1993 with the first generation Ford Mondeo, in 1985 with the Ford Scorpio, and in 1981 with the Ford Escort.