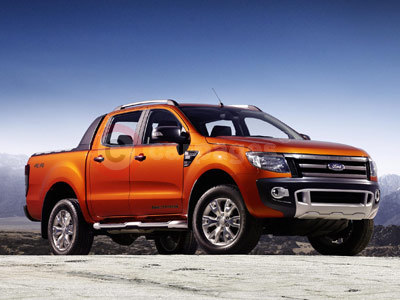 The all new Ford Ranger will be on show at Ford's stand at the Commercial Vehicle Show in Birmingham ahead of it's launch later in 2011.

The New Ford Ranger will be offered with three cab body styles - Single Cab, RAP (Rear Access Panel) Cab and Double Cab - the option of either a 4x2 or 4x4 drivetrain and two ride heights.

Customers in Europe will be able to choose between two Ford Duratorq TDCi diesels (2.2 litre 150PS and 275Nm and 3.2 litre 200 PS and 470Nm), providing improved power, torque and fuel efficiency.

The 150PS 2.2-litre four-cylinder diesel engine replaces the previous 2.5-litre unit in the Ford Ranger line up, and with 375Nm of torque offers over 13 per cent more pulling power. When fitted to a 4x2 model, it produces 37.2 mpg in the combined cycle - a reduction in fuel consumption of over 10 per cent compared to the previous model.

The new 200PS 3.2-litre five-cylinder diesel engine delivers 470Nm of torque, over 23 per cent more than the 3.0-litre engine it replaces. Its fuel consumption in a combined cycle ranges from 33.6mpg on a 4x2 variant to 29.4mpg on a full-option 4x4 model. With a 80-litre fuel tank, the new Ford Ranger is capable of 620 miles between fill-ups.

A larger load box offers increased carrying volume across all cab styles 3ith a towing capacity of up to 3350kgs.

All the three cab styles offer a deeper load box and increased length and width of the all new Ford Ranger mean large cargo capacities. The Single Cab and the RAP Cab have the biggest box volume at 1.82 cubic metres and 1.45 cubic metres respectively while the Double Cab offers 1.21 cubic metres.

The new Ford Ranger's cabin has been completely redesigned with increased space and new technologies more common in family cars. These include satellite navigation, Bluetooth connectivity and voice control, a Rear View Camera System with a display integrated in the rear view mirror - unique in the pick-up class.

Ford Ranger Images may not be UK specification cars. Colours and exterior and/or interior elements may differ from actual models.