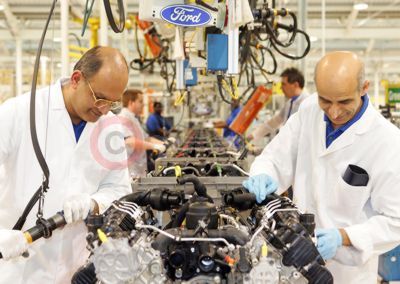 The launch of a new premium V8 diesel engine at Ford's Dagenham Diesel Centre has further strengthened the site's role as the company's global centre for diesel engineering and manufacturing.

Dagenham Diesel Centre specialists have exclusively engineered and produced this new top of the range engine for Ford Motor Company. It is a state-of-the-art twin-turbo 3.6-litre V8 power unit and the first came off the line today. Vehicle applications for the new engine will be announced later this year together with further technical details.

More than £12.2 million has been invested in the development and manufacture of the V8, bringing the total spent at Dagenham to £644.2 million since it became Ford's diesel centre of excellence.

Phil Lake, Ford's chief diesel engineer, said: "This new V8 engine underlines Ford Motor Company's commitment to engineering and manufacturing in the UK. It is a credit to Dagenham where employees have embraced their role as diesel specialists - engineering and producing advanced quality engines."

The V8 will be built on the same production line which has turned out 110,000 examples of Dagenham Diesel Centre's highly acclaimed 2.7-litre V6 engines for Jaguar, Land Rover and PSA Peugeot Citroen. Both V6 and V8 engine blocks are loaded onto cradles prior to assembly, which enable operators and the line itself to switch between the different units seamlessly.

Dagenham Diesel Centre is one of the most advanced manufacturing sites in the country. It features an ultra modern assembly hall where air is filtered to minimise dust particles that could interfere with the quality of the high tech diesel engines. A clean production environment is required for the high pressure common rail fuel and turbo charging systems featured on the latest advanced diesel engines.

The new V8 boasts a power output of over 270PS and develops up to 640Nm of torque. Dagenham Diesel Centre is gearing up to production volumes of up to 25,000 units a year. The cylinder heads for the V8 will be machined in Dagenham's adjacent original engine plant, where V6 machining already takes place. Both engines are made from lightweight compacted graphite iron, offering strength, durability and quietness.

Ford's Dagenham Diesel Centre was opened by the Prime Minister in 2003 and a total of 2,350 engineers and production operators are employed at Dagenham where 700,000 engines will be produced this year. Further new business for Dagenham assembling 1.4 and 1.6 diesel engines will take the site beyond a million units annual output from early next year.

Dagenham is the source for half of Ford Motor Company's diesel engine requirements globally. Around one in four engines in Ford Motor Company vehicles worldwide were built in Britain - assembled either at Dagenham or Bridgend engine plant, in Wales.