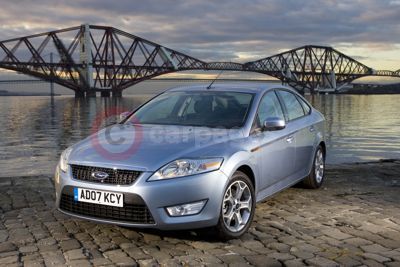 This latest accolade for Ford’s critically acclaimed newcomer was presented by the Association of Scottish Motoring Writers (ASMW) with the Ford Mondeo also winning the Family Car category.

Ford’s Mondeo was named Scotland’s top car at the 10th annual SCOTY event with the judging panel – motoring correspondents from an array of national and regional newspaper, magazines, radio stations and websites – awarding the Mondeo a win by the biggest margin since the Ford Focus scooped the inaugural Scottish Car of the Year title in 1998.

The show car, an Ink Blue Mondeo Edge complete with St Andrews flag on the roof, was led into the Robert Burns ballroom by the City of St Andrews pipe band to unanimous applause from more than 200 motor industry representatives.

Collecting Mondeo’s Family Car award and then the overall accolade, Ian Slater, Ford of Europe Vice-President Communication and Public Affairs, said: “I am thrilled the Ford Mondeo has won the Scottish Car of the Year for the company for a second time.  Winning the family car category further underlines that Ford is hitting the right target markets and I would like to thank the Association of Scottish Motoring Writers for the two awards. ”

The awards were presented by President of the ASMW Stephen Park who added: “Often different motoring journalists have different ideas about what makes a good car a great one but our top choice for 2007 didn’t just nudge ahead by a few votes. It won by what I believe is the biggest margin since our inaugural awards back in 1998.

“Look at what’s on offer and the reason for such unanimous agreement quickly becomes clear. It’s striking, it’s spacious and it’s sensational to drive. Offering a massive choice of engines, bodystyles and trim choices to bring a premium ownership experience at an a-Ford-able price, our winner certainly has a licence to thrill.”

Commenting on the Mondeo's  Scottish Family Car of the Year recognition, Stephen continued: “Bringing buyers back to a segment that’s often overlooked in favour of MPVs and SUVs needed something special and this year it arrived. When members of the ASMW first drove this car abroad they knew it had the potential to scoop a win in the Family Car category. When we drove it again on the test car rota it continued to impress with spacious packaging and a driving experience that’s vastly superior to anything else in the class.”