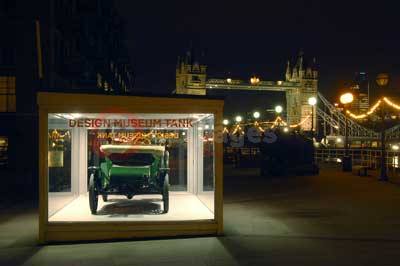 The car that changed the world has been installed in the famous glass 'tank' outside front of the Design Museum in London, within sight of Tower Bridge.

This display of the Ford Model T by the Design Museum recognises the significance of the vehicle as the first car to be assembled on a moving production line, helping to turn America into an industrial economy and mobile society.

This 1910 example of the Ford Model T has been provided by the Ford Heritage Collection, which is based further down the River Thames from the Design Museum at the Ford Dagenham plant.  The car will be on display until April 20.

The Model T, affectionately known as the "Tin Lizzie", was launched in October 1908, and rapidly became the world’s best-selling car. Made in Detroit in the US, at Ford’s first British factory at Trafford Park, in Manchester, and other sites worldwide, it dominated the motoring scene for almost 20 years.  More than 15 million Model Ts were built in Detroit alone, before the very last example of all - the 15,007, 033rd car - was assembled on 27 May 1927.

The original design, simple and robust, was based around a 2.9-litre four-cylinder engine developing 22bhp, which was matched to a two-speed epicyclic transmission.  The 100in wheelbase frame ran on front and rear transverse leaf spring suspension. Like many other cars of the period, there was a drum brake on the transmission shaft and lever-operated drum brakes on the rear wheels only.

The first cars were assembled at Piquette Park in Detroit but Ford opened a new factory at Highland Park in 1911, where there was space for expansion. Early production Model Ts were open top Touring Cars, but optional body styles, including Roadsters, Coupes and Town Cars were added to the range and even commercial versions followed.  Originally ticketed at $850, the price of a Model T was driven down as Henry Ford proved that simplicity and volume would make them less and less expensive to build.

The world’s first moving assembly line for building cars was installed at Highland Park in 1913.  Before this, it had taken 12.5 man-hours to assemble a Model T - this was reduced to not more than 1.5 man-hours. For several years the car was only available with black paintwork because the available black paint dried faster than any other known shade.  In this period, Ford also increased its wages - the new rate, of $5 a day, was much higher than that offered by rival concerns. This meant that workers could soon afford to buy their own Model Ts.

By 1917, selling prices of the Runabout had been slashed to $345, while the Touring Car cost $360. The list of featured equipment grew - electric instead of oil-lit headlamps arrived in 1915, demountable wheel rims and an electric starter motor became optional in 1919.

Sales and production rose sharply. Nearly 250,000 cars were produced in 1914, more than one million followed in 1920, and in 1925, when demand was at its peak, almost two million Model Ts of all types left the assembly lines. Prices reached an all-time record low in 1925, when a buyer could purchase a Model T Runabout for just $260 (which was less than a third of the original price in 1909).

The Model T was the very first British-built Ford, with the first-ever example being assembled at Trafford Park on 23 October 1911. It was Britain’s best selling car for many years in the 1920s. More than 300,000 cars were built at Trafford Park before production closed in August 1927.

British-built Model Ts built up a fine reputation, in peace and in war.  During the First World War, Ts provided the chassis for scout cars, machine gun carriers, and particularly for ambulances, this type eventually being built at more than 100 vehicles a day. Until the newly imposed "horsepower tax" hit the Model T hard, it often commanded more than 40 per cent of the UK market.   Many Model Ts survive to this day, specialised clubs cater for the brand all around the world, and some of the mechanical parts are still available for rebuilds and restoration.