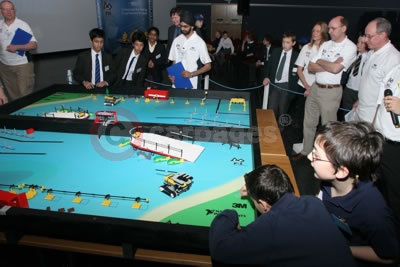 Ford and BP are national sponsors of the League, which is for school teams of nine to 16 year olds who use LEGO equipment to meet an annual challenge. Ford's three-year support (to 2008) is led by the company's engineering team at the Dunton Technical Centre, Essex - the UK's largest automotive research and development site. Ford and BP are strategic partners working together on fuels, lubricants and future technologies.

Engineers and designers who hone the look and performance of Ford's future vehicles will be at the Leicestershire college on Saturday (21st) to coach teams in the final of this annual challenge. More than 250 teams, who began competing in the FIRST LEGO League in September 2005, have been reduced to 25 through a series of regional heats.

This year's challenge is called Ocean Odyssey, requiring teams to build a model ocean-going craft to perform tasks such as:

All schools which entered the FIRST LEGO League received a 32 square feet mat depicting an ocean scene. LEGO models represent a ship wreck, oil pipeline, reef and sharks. One of the LEGO bricks used to build the craft contains a computer chip, which teams programme to guide the vessel around the mat performing tasks against the clock.

"The skills and techniques learnt by participants are the same as those used daily by Ford engineers at Dunton, Halewood and Loughborough," said Malcolm. "Ford is delighted to support the League as a national sponsor, demonstrating the importance the company places on exciting youngsters as early as possible in the challenging subject of engineering and encouraging them to consider the profession as a future career."

The best three teams from Saturday's final will represent the UK at a European final event in Eindhoven, Holland, on May 5-7. A further two teams will be invited to a world festival in Atlanta, USA, on April 27-29.