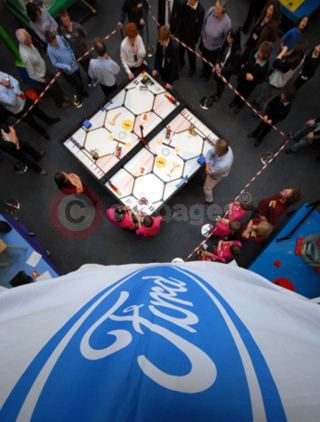 The league is the result of an alliance between education group FIRST (For Inspiration and Recognition of Science and Technology) and the global LEGO toy brand.  Ford's UK product development centre in Dunton, Essex, and BP, Ford's partner on fuels, lubricants and future technologies, both sponsor FIRST LEGO League.

David Cayton, Ford Dunton's education outreach and community manager, explained that the FIRST LEGO League was an ideal way for tomorrow's engineers to learn engineering concepts:  "The skills and techniques learnt by participants are the same as those used daily by Ford engineers at Dunton, Southampton and Halewood.

Ford is again delighted to support the League as a national sponsor, demonstrating the importance the company places on stimulating interest in youngsters as early as possible in the challenging subject of electronics engineering and encouraging them to consider the profession as a career".

The annual FIRST LEGO League provides participating nine to 16-year-olds with a challenge and LEGO equipment to use for set tasks.  They had to explore breakthroughs in the innovative area of microscopic-sized nanotechnology and demonstrate their new-found knowledge by designing, building and programming the robots at tomorrow's final.

Up to 3,500 children in teams of 10 embarked on the 2006 FIRST LEGO League challenge which kicked off in September.  Many had the advice and support of Ford engineers and apprentices acting as mentors.