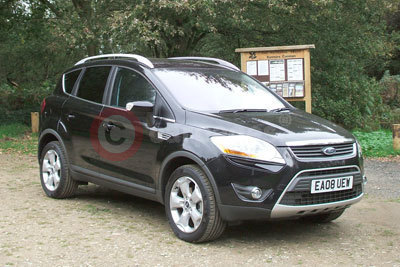 There are plenty of crossover vehicles on the market, so when Ford decided to enter the fray for the first time, the company knew that its car had to be that little bit better.

The television adverts suggest that, when it came to the Kuga, Ford started with a blank canvass; bearing in mind that the likes of the Ranger and Explorer are in a different segment. And so it is; the Kuga is based on the iosis X, concept car, which was first shown at the Paris Motor Show in 2006, an early warning as to Ford’s intentions. Clearly, the Kuga is not quite as extreme, which is just as well, as the iosis X wouldn’t win any beauty contests. Nonetheless, the design elements can be seen in the production car, but within the conventional crossover parameters and customer demands.

With this in mind, it is very difficult to avoid ‘me-too’ looks and create something that stands out from the crowd. At first glance, the Kuga appears very much the same as a good many others on the market. The front end features the ‘new face of Ford’ but looks a little Audi-esque and the rear half, with ‘kick-up’ windows has a hint of the Nissan QASHQAI, Peugeot 4007, et al. It sounds like a mish-mash of styles and yet another box on wheels but the Kuga manages to carry it off in a strangely appealing way.

Unlike some, the Kuga is blatant in declaring its ruggedness with a hefty skid plate that is something of a carry-over from iosis X, and a proposal of off-road prowess. Above this, is a shark-like maw - a design element that seems to be gaining favour with designers. There are a lot of chrome highlights, which together with the large, sparkly headlight clusters, serves to break up the deep and imposing bonnet.

Muscular front wheelarches and strong design lines lead the eye to the rear, along broad shoulders and a high window-line. Here, the design creates and equally solid impression with a skid plate that looks like a diffuser and houses the rear fog lights and twin tailpipes. The split tailgate is very handy in tight spots, when the shaped glass area can be opened on its own or as part of the door, as a whole. There is a distinct lack of brightwork here as attention is drawn by the end of the large shoulders separating and curving under the glazed area and also flowing down to form the rear bumper.

Ford tells us that there is a new range of wheels for the Kuga, from the standard, 17-inch to some ‘dramatic’ 19-inch alloys, influenced by the concept car.  Furthermore, there are no less than nine exterior colours, including two new metallics; Chill and Electric White.